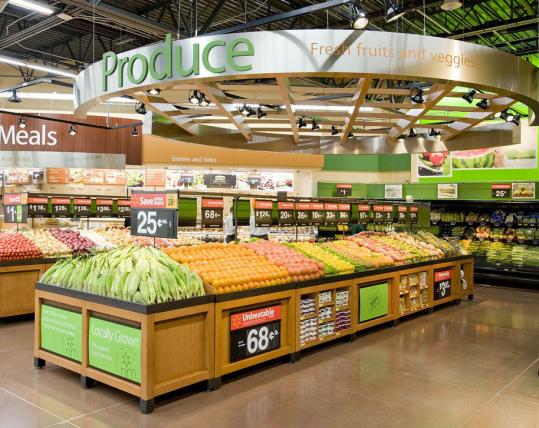 Analysts said Walmart Market could benefit consumers by offering another low-cost competitor to a region that only recently has seen new chains open stores.
By Kaivan Mangouri Globe Correspondent / July 22, 2011

Wal-Mart Stores Inc. is opening its first Market grocery store in the Northeast in Somerville, becoming the latest - and biggest - new competitor to try to shake up the once-staid supermarket scene in New England.

The Arkansas retail giant expects to soon sign a lease for the former Circuit City store on Mystic Avenue at the edge of the Assembly Square shopping district, and company spokesman Steven Restivo said the grocery should be open within a year.

Operating under the name Walmart Market, the grocery will be about 34,000 square feet, similar to a mid-size supermarket. Such smaller stores are part of a marked change in strategy for a company that built its reputation on sprawling big-box sites. Wal-Mart is now concentrating on opening smaller stores to improve its penetration in urban areas - especially New England, which the company has targeted as a major focus for expansion.

Analysts said the Walmart Market should benefit consumers by offering a another low-cost competitor to a region that only recently has seen new chains open stores. German discounter Aldi has recently opened stores in the state and New York chain Wegmans Food Markets Inc. has said it would soon open several of its large supermarkets here, too.

Wal-Mart “will be another thorn in the competition,’’ said Kevin Griffin, the head of Griffin Publishing, which produces industry market analysis. “Grocery retailing is coming around full circle in this area where we went from neighborhood markets to larger grocery stores to superstores to big-box retailers and, ultimately, the Wal-Mart footprint.’’

While it may be too early to know Walmart Market’s impact on other grocers, Griffin noted that any additional competition would be good for shoppers.

“I think the consumer can expect to see the typical grocery store get a reduction in size, and a little better product mix on the interior,’’ Griffin said.

One explanation for the recent surge of interest from outside competitors is that Massachusetts appears to have fewer supermarkets than other states. A study released earlier this year by the Massachusetts Public Health Association found the Bay State ranked near the bottom of states in having enough supermarkets with fresh nutritious food. The study said the shortage was particularly acute in dense urban areas, where land is scarce and big, suburban-style supermarkets have a harder time fitting in.

But the Somerville location is far from underserved when it comes to grocery stores. There are several major supermarkets a short distance away, along a road system that includes Interstate 93 and major secondary highways. It is also very close to the multibillion dollar Assembly Row redevelopment project, which includes housing and additional retail and a new MBTA Orange Line station.

Company officials said the Somerville opening is not related to Wal-Mart’s pledge, made earlier in the week alongside Michelle Obama, to open 300 stores as part of a US government initiative to reduce obesity by providing healthier food options in underserved areas. The company has not yet detailed how many stores it would open in Massachusetts as part of the campaign.

Though Massachusetts is major target for Wal-Mart, what the company ends up adding here will depend on the kind of real estate it can find. Company officials said the size of the property and its other attributes will guide whether Wal-Mart will open a larger retail store, the grocery chain, or its new line of even smaller stores, called Walmart Express. Wal-Mart has 49 big box stores in Massachusetts, but none in Boston.

The company won’t say how many of its new stores here will be Walmart Markets, but company officials said the retailer expects to open as many as 100 of the grocery stores in the current fiscal year. Currently, Wal-Mart has 183 Walmart Markets, primarily in the Southeast.

At Shaw’s, which has 84 stores in Massachusetts, a company spokesman said the chain will continue to emphasize locally grown produce and expertise in seafood. And a Stop & Shop spokeswoman said the chain’s 130 Massachusetts stores will continue to distinguish themselves by convenience measures, including smaller stores in many locations and the use of smartphone applications that allow customers to bypass checkout lines.

Another supermarket analyst, Neil Stern, a senior partner at Chicago-based retail consulting firm McMillan Doolittle LLP, said that Wal-Mart’s ability to run an efficient supply chain and accept lower margins will give it a price advantage over competitors, but that the company’s reputation for weaker customer service doesn’t mean it will automatically take market share from the other grocers.

“They have taken neighborhood market feel, and taken an upper scale market - it looks nicer than the Walmart [Supercenter],’’ Stern said.

“Clearly Wal-Mart’s bread and butter has been the middle-income to slightly lower-middle-income customer; the higher you move up the income bracket, the less [customers] are likely to go to Wal-mart,’’ Stern said.

The Market concept has gone through significant retooling since its inception in 1998, and the company stated at its annual meeting in June that it had finally come up with the right formula to increase its market share near urban centers, where it historically has faced with limited real estate opportunities and community opposition.