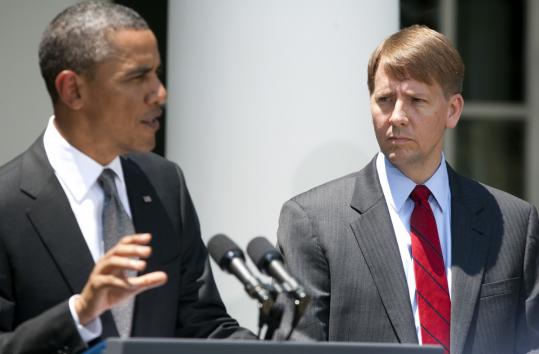 WASHINGTON - The consumer-protection agency that was created in the wake of the financial crisis launches today lacking key powers that Congress had intended to give it.

The Consumer Financial Protection Bureau will begin this week to enforce dozens of rules that Congress lumped together as part of last year’s overhaul of financial regulations. It will help ensure that credit card holders have a clear understanding of the plastic in their wallets, borrowers are protected from unfair lending, and military families have a dedicated financial watchdog.

Yet without a confirmed director, the agency cannot write or enforce new rules for nonbank financial companies, which made about half of the riskiest subprime loans before the crisis. The agency was created as the first federal regulator for many of these companies. Lawmakers wanted to prevent them from sidestepping rules that already applied to banks.

For payday lenders, prepaid card companies, and other nonbanks, the new rules may be a little like the 1930s and the advent of the Securities and Exchange Commission, says Eugene Ludwig, who was Comptroller of the Currency, the top regulator for national banks, during the Clinton administration.

The lack of a confirmed director means those companies have less to worry about in the short term. President Obama’s choice for the job is former Ohio Attorney General Richard Cordray.

Republicans say they will block him or any other nominee until the power of the agency and its director are scaled back.

Supporters of the agency say it will be more effective than its predecessors because it has a single focus: making sure consumers are treated fairly by banks, lenders, and other financial companies.

Before the financial overhaul, the responsibility for protecting consumers was shared among seven agencies that also were responsible for making sure banks stayed healthy. That sometimes presented conflicts, such as when banks increased their use of steep overdraft fees. Because the regulators were focused on banks’ financial performance, consumers often lost out.

Banks are nervous that the agency’s rules will make it difficult to profit from some products. That would discourage them from developing new offerings that consumers might want, they say.

Until Congress confirms Cordray or another director, Treasury Secretary Timothy Geithner will serve as the agency’s acting director.

Here is how the new agency will affect some consumer financial products and services:

■Mortgage costs: The true cost of a mortgage will become easier to understand. That is because there will be less paperwork and legalese for applicants to wade through. The agency has released drafts of a simplified, two-page form that would replace the current more complex forms that borrowers.

■Credit cards: Agency officials are working on a tool that would enable consumers to make apples-to-apples comparisons when shopping for cards. The credit card reforms that went into effect last February required changes to credit card statements, including clear disclosure of the cost of only making minimum payments.

■Credit scores: The agency will be responsible for enforcing rules that provide more information to consumers who apply for loans. Credit card or loan applicants who are rejected will automatically receive a copy of the credit score used as a basis for that decision.

■ Complaints: For the first time, there will be a single hotline for consumers to make complaints about any financial product or service. The new tip line will be rolled out in phases. At first, it will accept complaints about credit cards.

■ Military families: Through its Office of Servicemember Affairs, the agency will seek to protect military families from predatory lending and other problems often seen in that community. Servicemembers enjoy special legal protections because of the difficulty paying bills when overseas. For instance, foreclosures on active-duty servicemembers are illegal, and interest rates on certain debts, including mortgages and credit cards, must be lowered to 6 percent.

■ Senior citizens: The agency will operate a separate office aimed at serving this community, which will continue to grow as baby boomers retire.

■ Bank supervision: Agency officials will begin monitoring the treatment of consumers by the 111 biggest banks that have total assets of over $10 billion. This group represents more than 80 percent of the industry. Smaller banks and credit unions are not part of this program, which will include on-site examinations, although they must follow rules established by the agency.