A jobs pinch for the ages

As older workers stay in place, younger aspirants struggle to break in 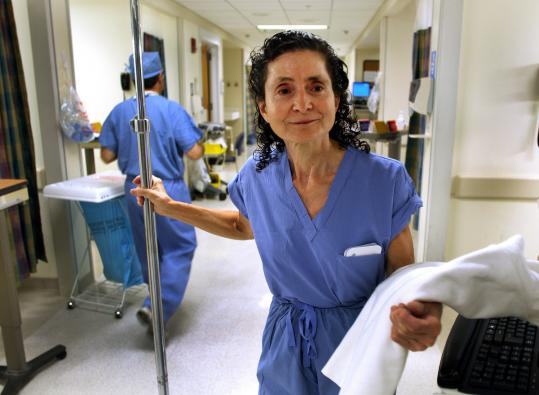 "There are many people who continue to work into their 80s ... I want to work as long as I'm physically able," said Roxane Larouche, 64, an operating room nurse at Beth Israel Deaconess Medical Center. (John Tlumacki/Globe Staff)
By Megan Woolhouse Globe Staff / July 21, 2011

Roxane Larouche, 64, an operating room nurse at Beth Israel Deaconess Medical Center, is just a year away from official retirement age, but has no plans to leave her job anytime soon.

Since her younger husband changed careers during the recession and returned to school to become a pharmacist, the couple has relied on their savings and Larouche’s income.

“There are many people who continue to work into their 80s,’’ Larouche said. “I’m not saying that’s what I would do, but I want to work as long as I’m physically able.’’

Larouche is among a growing number of older Americans who are working past their traditional retirement age, and in doing so, reducing opportunities for younger workers in a difficult job market, according to a study by Commonwealth Corp., the state’s quasi-public workforce development agency. Since the recession began at the end of 2007, workers age 55 and older were the only group to increase participation in the US workforce; meanwhile, participation rates among workers under 25 declined sharply.

Massachusetts has an older population that is proportionally larger and faster growing than the nation’s as a whole, which could put additional pressure on younger workers here, according to the study.

“The slow recovery has meant it has been really difficult for younger workers to get a foothold,’’ said Nancy Snyder, president of Commonwealth Corp. “Younger workers are being disproportionately impacted.’’

The state unemployment rate last year was 8.9 percent for workers under 55, compared with 7 percent for older workers.

Among Massachusetts industries that experienced the sharpest increases in older workers were construction, information services, health care, and education, according to the study.

Alyson Smith, a recent graduate of Anna Maria College in Paxton, is a licensed teacher. But unable to find a teaching position, she took a job as a teacher’s assistant, supplementing her paycheck with second and third jobs as a lifeguard and swimming instructor, and living with her parents.

The patchwork schedule means she works seven days a week.

“There’s no day to rest or recuperate,’’ said Smith, 23, “and there’s no time to reconnect with family or friends.’’

While many younger workers are giving up job searches, or, like Smith, taking lower-skill jobs, older workers who might have retired and created job openings must keep working, the study found. Many saw years of retirement savings vanish in the stock market crash of 2008, and many had to dip into retirement accounts to make ends meet after job losses.

Many need to keep employer-sponsored health care benefits that cover their families. Others sacrifice the dream of retirement to pay for children’s education.

Alfred Mazzarelli, 55, of Revere, said he is paying $4,000 a month on loans he took out to send two of his children to Bentley University in Waltham and College of the Holy Cross in Worcester, even as the weak economy slowed business at his Harvard Square hair salon. As a result, he expanded the shop’s hours and works seven days a week to make ends meet. Retirement no longer seems an option.

“I have to work until I can’t anymore,’’ said Mazzarelli.

Meanwhile, his daughter, Andrea, who graduated from Holy Cross last spring, has been unable to find a job in the field in which she studied, marketing. She lives at home, piecing together jobs selling advertisements at a community newspaper and working in a Comcast promotional booth outside Fenway Park during games. She described her hunt for bachelor’s degree-level marketing jobs as “absolutely awful.’’

“Not only was there nothing available, but I’ve gone through a ton of personal contacts and nobody could come up with anything,’’ she said. “It’s really bad right now.’’

As the Mazzarellis show, workers on both ends of the age spectrum feel the strain from the struggling economy. The unemployment rate for US workers under 25 increased by more than half between the end of 2007 and 2010, to more than 18 percent. It more than doubled for workers over 55 to just about 7 percent, according to the Commonwealth study.

Maura McAvoy, 67, of Dorchester, has looked for work as a mental health counselor for more than a year, since federal funding for her job ran out.

McAvoy, with more than 25 years experience, said work in her field was abundant most of her life. A single mother, she raised two children and paid her bills, thinking she would always be able to find a job. Now that many mental health counseling jobs have dried up since the recession, she worries about her future.

“I have really great kids,’’ she said of her adult children. “I don’t want to be a burden on them.’’

Joan Cirillo, executive director of Operation Able, a nonprofit that caters to older workers seeking jobs, said her agency has seen demand for services double. Many older workers are taking part-time positions and entry-level jobs for which they are overqualified - jobs that have historically gone to younger workers breaking into the workforce.

One client is a lawyer and mother of six looking for a position as an administrative assistant, she said. “This is one of the tough things for mature workers,’’ Cirillo said. “Very often when they transition, they no longer can command the salary or the job responsibility they had in their old job. That’s a really tough lesson.’’