The sprawling Borders store in Downtown Crossing draws a steady crowd, but too few purchase books these days 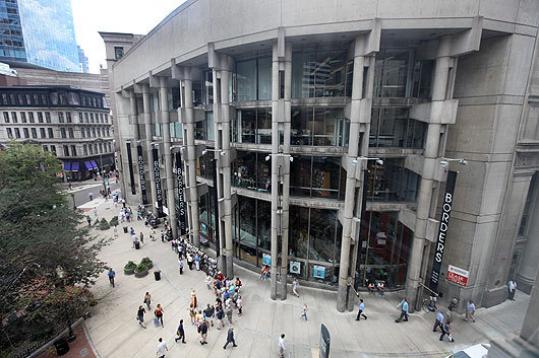 The flagship Borders downtown is being studied by potential buyers, including one group that would turn the 40,000-square-foot space into offices. (Pat Greenhouse/ Globe Staff)
By Taryn Luna Globe Correspondent / July 20, 2011

It’s an all too familiar scene: customers browsing at bookstores, but not buying what they read.

As she perused selections at the massive Borders outlet in Downtown Crossing yesterday, Brookline resident Tanya Duncan, 48, said she often shops for books for herself in the store, then gets on the Internet to buy the digital version when she gets home. Duncan downloads the books to her iPad and reads them on the train ride to work.

“It’s nice to be able to touch, feel, and hold the books before you look online,’’ she said.

Customers like Duncan may explain why Borders bookstores across the country will be liquidated, beginning as soon as Friday. The store’s parent company, Borders Group Inc., filed for Chapter 11 bankruptcy protection in February. At the time, the chain had 23 stores in Massachusetts. Now only 14 remain open, and the rest could be gone by the fall.

About 20 people, many dressed in business attire, flipped through magazines on the first floor of the Downtown Crossing store yesterday. Eric Peterson, 24, of the North End, leaned against a wall and read Golf Digest while on his lunch break.

“I’m very disappointed,’’ he said. “This location is where I come almost every day to read a magazine or book.’’

The banking analyst, who frequents the store three days a week but buys only about one book a month, said he prefers to walk the aisles of a store to find the books he wants to read. When the store closes, he plans to start using the online retailer Amazon.com instead.

On the second floor of the 40,000-square-foot bookstore, more than a dozen people sunk into black couches and armchairs with books and magazines on their laps. Mirroring library etiquette, the few who spoke did so in hushed voices.

James Patterson, 34, of Roxbury, who is currently unemployed, sat reading a “Fall of the Hulks’’ comic book. The last time he bought a book from Borders was at least a month ago, he said, although he spends two hours a day there researching careers and companies. (The comic book was a little pleasure reading to break up the day, he said.)

Patterson said the up-to-date selection of reading materials at Borders beats the choices at the public library, where he goes to use the Internet in 15-minute spurts to search job listings. “Here, you have no time limit,’’ he said.

When Borders closes, Patterson plans to use the library a bit more often, but he isn’t ready to accept the fall of the chain. “I am hoping that it sticks around,’’ he said.

The chances it will are slim. A $215 million takeover bid by private equity firm Najafi Cos. unraveled last week under objections from creditors and lenders, who argued that Borders would be worth more if it liquidated immediately. A hearing to consider the sale of Borders to a liquidators group led by Hilco Merchant Resources and Gordon Brothers Group of Boston is slated for later this week.

Andy Graiser, copresident of DJM Realty, a unit of Gordon Brothers, said the liquidators will auction off the leases of the 399 remaining Borders stores, including the 14 in Massachusetts, in the coming months. Borders had been operating 642 stores when it filed for Chapter 11.

Retailers interested in the leases are screened based on their financial statements and suitability for the space, and although landlords have the right to object, most bids are approved in sales hearings, he said.

Graiser said it’s too soon to tell how quickly the store will be filled with new retailers, and noted landlords often buy back profitable spaces.

DJM is vetting three parties interested in the Downtown Crossing location, including one group that would turn it into offices.

“It definitely has some real estate challenges to it,’’ he said. “It has several stories and not too many people can do it.’’

Standing outside the downtown Borders store as he browsed the bargain racks, Andre Lopoukhine, 63, said he prefers books over e-editions. He got a kick out of a “You can’t sign a Kindle’’ sign he saw outside a small bookstore on a recent trip to Delaware.

The stock broker, who buys one book a month, wasn’t surprised the chain is shutting down.

“I kind of saw the writing on the wall,’’ he said. “The Internet is killing the business.’’