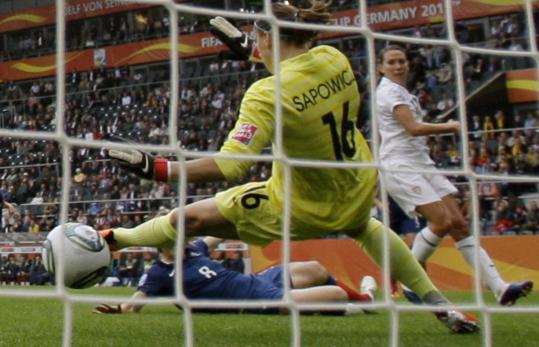 Lauren Cheney, a member of the Boston Breakers, scored the opening goal in the US semifinal win over France in World Cup play Wednesday. (Frank Augstein/Associated Press)
By Taryn Luna Globe Correspondent / July 16, 2011

With six of its players in tomorrow’s final of the women’s soccer World Cup, the Boston Breakers are already reaping rewards from the riveting play of the US national team: Ticket sales have increased by as much as 400 percent.

“We’ve seen a huge spike in single-game ticket sales and group sales since the US defeated Brazil in the quarterfinal last Sunday,’’ said Andy Crossley, the general manager of the Women’s Professional Soccer team.

Five members of the Breakers are on Team USA, including one of the stars of the tournament, Lauren Cheney, and starters Amy LePeilbet and Rachel Buehler. Stephanie Cox and Kelley O’Hara round out the Boston contingent.

And among the team’s newest additions is Japanese star Aya Sameshima, who is leading her nation in its first-ever World Cup final.

The sales escalation is a welcome relief for a league plagued by low attendance - Breakers home games attract around 3,600 fans - and professional marketing firms say the teams should capitalize on the national team’s success as players return to their home fields next week.

Regardless of the outcome of tomorrow’s match, the Breakers’ World Cup players will be welcomed home with a “See Extraordinary Heroes’’ game against the Western New York Flash on July 24. The Flash features the new national team star Alex Morgan, and includes the US squad’s current nemesis, Brazilian superstar Marta.

In the gripping match against Brazil, Marta scored two goals, and was the player fouled in the controversial call that earned Buehler, a defender for the Breakers, a red card that forced the US team to finish the game down one player. It’s unclear whether members of the national teams will be playing in this game so soon after the conclusion of the World Cup.

The matchup is part of a campaign by Women’s Professional Soccer to increase ticket sales and promote the players’ accomplishments in the World Cup, being hosted by Germany. Jerseys will be auctioned and proceeds from the game will go to Boston’s Making Strides Against Breast Cancer organization.

However the timing of the World Cup makes it difficult for the Breakers to capitalize on team members’ accomplishments. The women’s season is down to its final month, with only four home games left. Many players will soon be preparing for the next major international showdown, the 2012 Olympic Games in London.

So, true to their grass-roots culture, the Breakers plan to focus on the fans’ experience inside Harvard Stadium, instead of spending money on new advertising and marketing campaigns off the soccer pitch.

“At the end of the day, we’re a local small business,’’ Crossley said. “We aren’t going to go out and start a national media campaign.’’

John Guppy, the president of Gilt Edge Soccer Marketing and former president of Major League Soccer’s Chicago Fire, said the excitement surrounding the World Cup is “‘a huge opportunity’’ for the Breakers, but acknowledged the team can’t pursue a mass marketing strategy.

Instead, Guppy said, the Breakers can reach more fans by linking meet and greets with the players to group ticket sales to youth soccer clubs, as well as using low-cost channels, such as social media, public appearances, and school visits.

“You put these players in front of 9- and 10-year-old girls in a school event and you’ve got a captured audience,’’ Guppy said.

Guppy said the attention on women’s soccer isn’t going to slow down soon. “The good thing for Women’s Professional Soccer is that they have a second potential hit right around the corner with the Olympics next summer,’’ he said. “They’ve got a really interesting 12-month window, which if I was running a WSP team, I’d be really excited about.’’