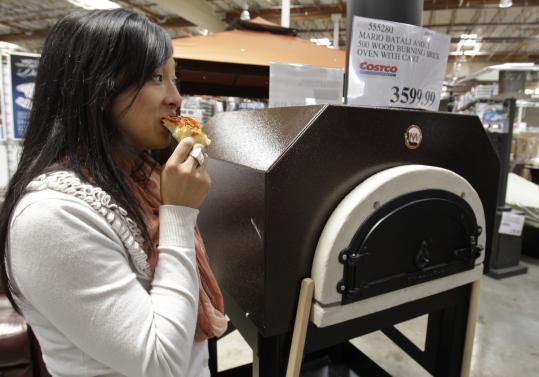 Costco has long used the term “treasure hunt’’ to explain why up to a fifth of its stock is limited-quantity items kept in stores for as little as a week, such as this $3,599.99 brick oven. The use of unexpected products is a growing strategy. (Paul Sakuma/Associated Press)
By Ellen Gibson Associated Press / July 6, 2011

Trader Joe’s, the specialty grocer, might not have the cheapest toilet paper or the most kinds of ketchup, but it hooks shoppers with mango butter, chocolate-covered pomegranate seeds, and cilantro-and-jalapeno hummus.

These goodies are not on most grocery lists, but they are eye-catching enough to tempt shoppers into an impulse buy. At a time when families are watching dollars and the Web makes discount-hunting easy, unexpected treasures are an increasingly important strategy for stores.

“It’s the wow factor that’s getting people to buy,’’ said Wall Street Strategies analyst Brian Sozzi. So shoppers may go into T.J. Maxx or a DSW shoe store looking for a bargain on something they need but end up splurging on irresistible finds, like dirt-cheap Ray-Bans or half-priced Puma sneakers.

Dollar Tree lures customers with rock-bottom prices on cleaning supplies, then tempts them with extras like leather iPod cases. And at Costco, tucked among the hulking pallets of mayonnaise and paper towels, is a section where shoppers never know what they’ll find.

Costco has long used the term “treasure hunt’’ to explain why up to a fifth of its stock is limited-quantity items kept in stores for as little as a week. Sometimes it’s seasonal items, such as margarita machines in summer. Often it’s surprisingly trendy, such as bargain-priced Hunter rain boots.

The wholesale chain shows the strategy can pay. Revenue at US Costco stores open at least a year was up 10 percent last quarter from last year, with strong growth in nonessentials like jewelry and home and garden.

TJX Cos., the Framingham, Mass., parent company of T.J. Maxx and other chains that sell designer goods at a discount, gained momentum during the recession. That growth is continuing after the recession, at a time of high gas prices and stagnant incomes. First-quarter revenue at Marshalls and T.J. Maxx stores open at least a year was up 4 percent over last year.

Superstores like Kmart and Walmart are getting stung by online competition. Any mass-market product - think Jif peanut butter or Hanes T-shirts - can be comparison-priced online, and people tend to buy from the cheapest source. Increasingly, that’s a Web retailer.

But the off-price stores, such as T.J. Maxx and Marshalls, often pick up discontinued products and sell them cheaply, said Michael Dart, coauthor of the book “The New Rules of Retail.’’ Shoppers probably will not find them for less - or at all - online.

By embracing the treasure hunt, dollar stores have kept the middle-income shoppers they attracted during the recession. Dollar Tree chief executive Bob Sasser said his stores have expanded their assortment of “fun’’ discretionary products and added brand names. That means more surprises to tempt shoppers.

It seems to be working. Dollar Tree’s revenue at stores open at least a year was up 7.1 percent in the most recent quarter. Both traffic and the size of the average transaction increased.