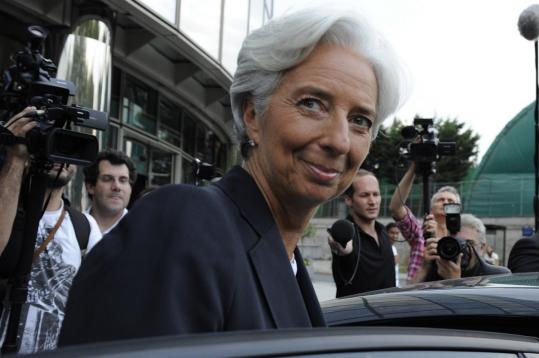 PARIS — Christine Lagarde yesterday became the first woman chosen to lead the International Monetary Fund, taking on one of the most powerful positions in global finance as a worsening crisis in Greece threatens the euro currency union and rattles financial markets worldwide.

Her victory was sealed when Treasury secretary Timothy F. Geithner said the United States would endorse her over the Mexican central bank governor Agustin G. Carstens.

Lagarde, currently the French finance minister, said in a statement that she would strive to ensure the IMF remained “relevant, responsive, effective, and legitimate, to achieve stronger and sustainable growth, macroeconomic stability, and a better future for all.’’

As a top official of one of Europe’s most powerful economies, Lagarde has been at the forefront of efforts to contain the European debt crisis, which led Greece, and then Ireland and Portugal, to seek bailouts to help them pay their huge sovereign debts.

A year after Greece secured a rescue package of $140 billion at current exchange rates, the country’s debt problems have resurfaced, posing profound challenges to the IMF, the EU, and the European Central Bank as they try to contain the crisis.

That is no easy task. Global markets have been whipsawed in recent weeks as fears mount that Greece could default on its debts, despite aid from the IMF and its European partners.

Representatives from emerging markets fought to claim the IMF leadership from Europe, which has produced every managing director since the fund’s inception more than 60 years ago. Carstens argued that Europe needed someone who would bring a fresh perspective to the crisis.

But Lagarde convinced her backers that the IMF needed a European at the helm to address the Continent’s deepening debt problems.

Lagarde was initially opposed to getting the IMF involved in Greece’s rescue, seeing it as a problem that Europe’s politicians and policy makers needed to resolve. When the IMF entered the scene last year, Lagarde took a hard line on Greece, at one point threatening to withdraw financial aid if the country did not respect its engagements to cut spending and raise revenue.

Moments after her appointment, she urged the Greek government and opposition on French television to pull together to pass the unpopular austerity measures needed to unlock financial aid and avert a default.

Yet Lagarde has also come under fire from those who say she and other senior European policy makers mishandled the situation from the beginning, and are now scrambling to clean up problems of their own making. Geithner last week chastised Europe for failing to speak with one voice on the Greek crisis.

Simon Tilford, the chief economist of the Center for European Reform in London, said the IMF should never have become so deeply involved. “For the IMF to be devoting so much financial and human capital to try to combat a problem in Europe which is largely political in origin and can only be solved by political agreement is controversial,’’ he said.

Lagarde, 55, a former top executive at the Chicago-based law firm Baker & McKenzie, is considered a veteran political negotiator who speaks her mind, even when it has put her at odds with her boss, France’s president, Nicolas Sarkozy. She has nurtured a close personal relationship with the German chancellor, Angela Merkel, leading the two women to find common ground on several important policy decisions as the euro crisis unfurled.

Carstens issued a statement congratulating Lagarde, and urged her to ensure that the IMF “will make meaningful progress’’ in strengthening its governance.

Lagarde plans to start her five-year term in Washington on Tuesday.