The scoop on rising food costs 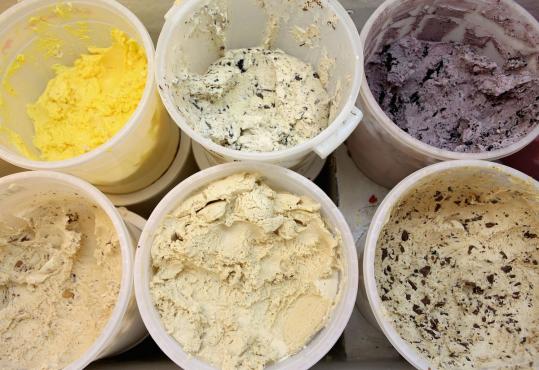 At Toscanini’s, the price of a single scoop has risen 40 cents since March. (Wendy Maeda/ Globe Staff)
By Megan Woolhouse Globe Staff / June 19, 2011

CAMBRIDGE — Darcy Hutchinson savored her single scoop of mango ice cream on a recent afternoon at Toscanini’s, a gourmet ice cream shop famous for ingenious flavors. The treat cost $4.25 — up 40 cents from March — but the 27-year-old Tufts veterinary school student said she has grown accustomed to high prices.

Ice cream may be a deliciously simple combination of milk, butter, and sugar, but the true cost of an ice cream cone is no simple business calculation. Toscanini’s price tag is part of complex and increasingly interconnected world economy, one that links a dairy farm in the tiny Western Massachusetts town of Colrain to the sprawling neighborhoods of Beijing.

The story of this scoop of ice cream, as it moves from raw materials to finished prod uct, captures the myriad forces that are pushing food prices higher and putting pressure on beleaguered US consumers and a tentative economic recovery. Like other commodities, milk, sugar, and gasoline prices have soared because of rising demand, catastrophic weather, and political unrest.

A cyclone in Australia wiped out sugar beet crops. Uprisings in the Middle East have threatened to disrupt oil supplies. Growing demand for milk by Asia’s rising middle class affects the over-the-counter price of an ice cream cone at Toscanini’s.

“In any economic chain, there are winners and losers,’’ said Ricky Volpe, economist at the Department of Agriculture. “But there’s no question that consumers are one of the losers. Specifically American consumers.’’

“It’s a straight 5-to-9 job,’’ quipped Albert “Chip’’ Hager, the third-generation dairy farmer who owns the farm and runs the milking operation with his son-in-law, Aaron Stevens.

The 700-acre spread, home to 150 cows, mostly Holsteins, is where Toscanini’s ice cream begins. While the prices Hager receives for milk are the highest in more than two years, his costs are increasing faster. Hager supplements the feed he grows — corn and hay — with grain he buys. His grain costs have jumped to $27,000 a month, up $5,000 from a year ago.

Much of the increase is because of the rising price of corn, rooted in soaring crude oil prices and demand for ethanol, the corn-based gasoline additive. Corn exports to China also play a role; US farmers exported about 17 times more corn to China last year than in 2009.

As the sun rose on a recent morning, cows quietly herded into the milking parlor, where Hager and Stevens waited. They inspected animals for illness, spoke to them gently, and fit their udders with mechanical milkers that do what farmers once did by hand. The three-hour process yielded 407 gallons of milk.

The price for the milk is determined by USDA rules, which recently set the minimum price at $20 per 100 pounds of milk (about 12 gallons). That means Hager’s morning yield was worth a minimum of $700.

But those prices change. When milk fell below $14 per 100 pounds in 2009, Hager said he had to borrow “hundreds of thousands’’ of dollars to keep operating. Now that milk prices are up, feed costs have risen, eating into income he needs to repay the loans.

“The last few years have been rough here,’’ Hager said. “Instead of making improvements, we’re digging ourselves out of a hole.’’

Milk from Hager’s Colrain farm is picked up every other day at 5 a.m. and hauled to Agri-Mark, a dairy cooperative with operations in West Springfield. Agri-Mark sells the milk from hundreds of farms to bottlers and dairy processors that make ice cream, cheese, and cream.

Lynnfield-based HP Hood is one of the customers. Hood’s processing plants in Agawam and Concord, N.H., specialize in ice cream “mix’’ — the powdered and skim milk, butter, and sugar combination sold to ice cream makers at shops.

The price Hood pays Agri-Mark for milk is based on the prices of cheese, milk powder, and butter in the Chicago commodities market. And those prices have risen because of a surge in international demand for US milk, particularly in Asia.

The US dairy industry is exporting a record 14 percent of its milk production, up from about 4 percent a decade ago, said Robert Wellington, an Agri-Mark economist.

Mike Suever, senior vice president at HP Hood, said the company, which has 20 plants across the United States, exports 5 percent of its milk, mostly to China. “Demand is very high right now,’’ Suever said. “Dairy has entered a world market.’’

Global demand for sugar has forced prices higher, but so, too, has weather. A cyclone that devastated sugar beet crops in Australia reduced sugar supplies. Droughts across Russia and the Ukraine have also damaged sugar beet yields, leading to forecasts of continued high prices.

“There’s just a lot of uncertainty out there,’’ said Stephen Haley, an agricultural economist for the USDA.

More than 400 gallons of ice cream mix are delivered each week to the Rancatores’ shop, and indeed, they are paying 25 percent more than last year. Rising gas prices have also added a $1.90 surcharge to each of the week’s six daily deliveries.

Like many business owners, the Rancatores absorb a portion of higher costs, accepting lower profits to keep prices competitive. They said they tried to delay price increases, in the hope dairy costs would retreat, and introduced a smaller portion, the “micro-scoop,’’ for $3.50. This year, Mimi Rancatore called Hood to try to determine when milk prices might fall.

“Once I realized we were breaking the $4 barrier’’ for a single-scoop cone, Mimi Rancatore said, “I was very nervous.’’

So far, breaking that barrier hasn’t deterred ice cream lovers. On a recent afternoon, Johnny Earle, founder of Johnny Cupcakes T-shirts, ate a two-scoop cup of vanilla and espresso chip that cost $5.50. He said he drove all the way from Hull to satisfy his craving.

“I don’t think you can ever pay too much for good ice cream,’’ he said.

Toscanini's and other shops are seeing rising ice cream prices.
Your comment is subject to the rules of our Posting Policy
This comment may appear on your public profile. Public Profile FAQ