With Fed board bid over, retiring MIT professor to explore causes of crisis 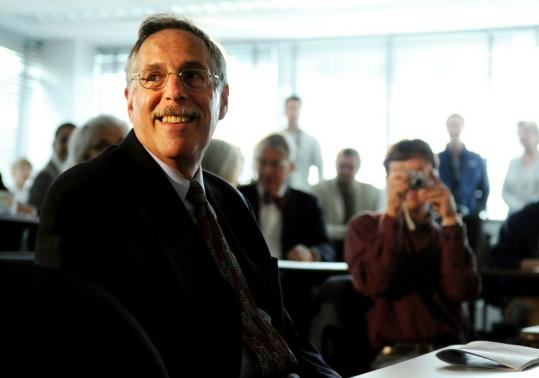 Do not expect Nobel Prize recipient Peter A. Diamond, the MIT professor who withdrew his nomination for a seat on the board of the Federal Reserve, to slip quietly into the shadows of academia.

Diamond plans to retire from teaching at MIT on July 1, but he said yesterday that he will continue his research into the underlying causes of the financial crisis so that he can weigh in on policy reforms.

“The obvious, pressing problem we have, the reason I was so eager to join the Fed, was how to head off future financial crises,’’ Diamond said in an interview yesterday. “That’s what I will focus my basic research on, and in time I will get active around policy.’’

For now, the 71-year-old scholar is spending his time at his summer home in Sunapee, N.H., where he likes to swim, take kayak rides, and walk. A much sought-after speaker since he received the Nobel Prize in economics last October, he recently drew crowds at a conference in Vienna, where he discussed pensions; at his 50th Yale University reunion, where he appeared on a panel discussing the global financial crisis; and at North Shore Community College, where he gave the commencement address.

With his son, Matt, graduating from an occupational therapy program, Diamond encouraged the students to follow a path of “exploration and experimentation.’’

“You should look for a chance to do things that genuinely help other people and things that you can feel are worthwhile,’’ he told graduates. “Even when they are difficult.’’

The words were loaded with meaning for an esteemed academic at the height of his career as he underwent a long and contentious nomination effort. President Obama nominated Diamond three times to the board of the Federal Reserve, yet Senate Republicans blocked the nomination each time. In the most recent Senate Banking Committee vote last month, no Republicans supported Diamond, making it highly unlikely that he could win confirmation from the full Senate.

Republican opposition to Diamond was led by Senator Richard Shelby of Alabama, who argued that Diamond lacked credentials for the job, a criticism that left Diamond’s supporters incredulous as they pointed to his Nobel Prize and 45 years of economic and policy research at Massachusetts Institute of Technology.

Diamond said yesterday that the process left him dissatisfied, though he would not elaborate. “I will say it’s been an education,’’ he said.

When asked what needs to be done to fix the nation’s unemployment problem, Diamond did not hesitate. “It seems to me blatantly obvious we need more fiscal stimulus,’’ he said. “But of course, not everyone agrees.’’

Many congressional Republicans, including newly elected Tea Party activists and opponents of Diamond’s nomination, have argued against renewed stimulus spending, instead demanding huge reductions in government spending to reduce the ballooning national deficit. Critics of stimulus spending argue that increasing debt will drive interest rates higher and hurt the economy.

Diamond said prolonged stimulus by the government would eventually cause interest rates to rise, but he said that problem is “down the road and not imminent.’’

“We are nowhere near anything like that,’’ he said.

The answer is so clear to him, he said, the subject does not even pique his future research interests. He said he thinks his time and energy would be better spent analyzing the underlying causes of the financial crisis, including trying to answer questions about how much capital financial institutions should be required to hold in reserve. He said he has been reading academic papers, economists’ analyses, and a number of books by reporters about the details of the crisis.

Derivatives, the complex financial instruments that helped spread financial contagion across global markets, is another area he wants to plumb.

Diamond said he is aware his findings could again lead him into the political fray, which he said he welcomes. “The whole point of doing policy analysis is to make it as visible and available as I can,’’ Diamond said. “I will be very much involved.’’