After complaint, troops get fourth bag for free 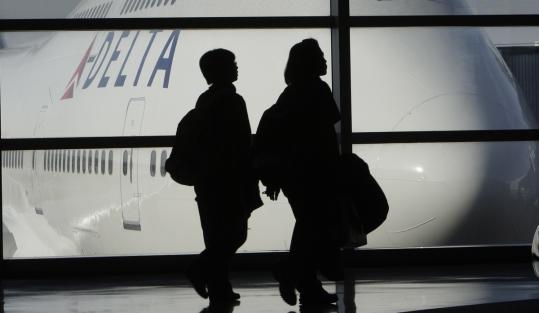 ATLANTA — Delta Air Lines changed its baggage policies yesterday in reaction to a firestorm of criticism over an incident in which a group of US soldiers returning home from Afghanistan were charged $200 each for extra bags on a flight to Atlanta.

According to a video shot on the plane by Staff Sergeants Fred Hilliker and Robert O’Hair and later posted on YouTube, the soldiers were authorized to check as many as four bags, free of charge. But on their flight from Baltimore to Atlanta, they were hit with a $200 fee per soldier for a fourth bag, with the group paying a total of $2,800.

Delta spokeswoman Susan Elliott declined to say whether Delta would reimburse the soldiers.

“We do not disclose individual passenger information as it relates to a specific issue, but I can tell you that we are going to be working very closely with them to ensure we make them whole in this,’’ Elliott told The Atlanta Journal-Constitution. “At the end of the day we’re going to make things right with them.’’

In a blog posting on Delta’s website, the airline’s social media manager, identified only as “Rachel R.,’’ apologized and outlined a policy that allows three bags per military passenger in coach, and four per passenger in business and first class.

“In the case of today’s incident, we would like to publicly apologize to those service men and women for any miscommunications regarding our current policies as well as any inconvenience we may have caused,’’ the posting said. “We are currently looking further into the situation, and will be reaching out to each of them personally to address their concerns and work to correct any issues they have faced.’’

By early afternoon yesterday, the airline had announced a change in its baggage allowance.

“Delta Air Lines today increased its free checked baggage allotment for US military traveling on orders in economy class to four checked bags,’’ the airline said in a press release.

The new policy “also allows US military personnel traveling on orders in first and business class to check up to five bags at no charge. Each bag may weigh up to 70 pounds and measure up to 80 linear inches,’’ the statement said. “Because of weight, balance, and space constraints, Delta Connection carriers accept up to four bags at no charge.’’

In the video posted on YouTube, O’Hair said his fourth bag was a weapons case for a grenade launcher, rifle, and pistol.

The Army newspaper Stars and Stripes reported on its website that O’Hair and Hilliker were deployed with a Reserve unit based in Georgia, and were on their way to Fort Polk, La.

Delta’s initial explanation and apology appeared to do little to stem the criticism, as the first reply to the blog posting on the airline’s website began with, “How un-American can Delta be?’’

Other replies posted on the blog early yesterday read, “I’m a Vietnam vet and will never fly Delta again unless all of the fees are returned. I don’t care what your policy is,’’ and “It is very sad and so wrong that it took our soldiers doing a video to expose what Delta did to them and bring awareness of this situation to the entire world.’’