US job growth could be slowing 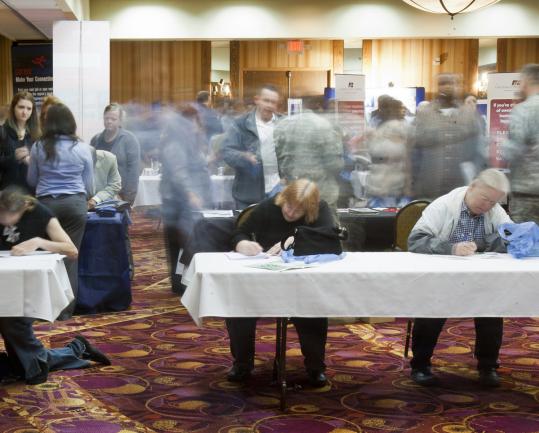 WASHINGTON — Hiring may be slowing after months of healthy job gains that helped drive economic growth.

The government’s May jobs report, to be released today, is expected to cement evidence that the economy has weakened in the face of high energy prices, scant pay raises and a depressed housing market. Analysts have been rushing to scale back their forecasts for job creation.

Despite those worries, the government has shifted away from economic stimulus and is focused on debt reduction. The Federal Reserve is not expected to take any further steps to spur growth. Persistent economic weakness could also imperil President Obama’s prospects in the 2012 election.

Pressure to focus on debt reduction was heightened yesterday by a warning from Moody’s Investors Service. The credit rating agency said it might downgrade the nation’s credit rating if the government failed to make progress in raising the debt limit in coming weeks. Republicans say they will agree to raise the limit only if Democrats back deep spending cuts.

“There are reasons to be worried,’’ said Michelle Meyer, an economist at Bank of America Merrill Lynch. “It appears there’s not much desire to do more in Washington even as the economy weakens.’’

Higher gas prices have left less money for consumers to spend on other purchases, such as furniture, appliances, and vacations. And average wages aren’t even keeping up with inflation. As a result, consumer spending, which fuels about 70 percent of the economy, is growing sluggishly.

Oil prices soared from about $70 a barrel last summer to as high as $115 this spring. They were driven up by turmoil in the Middle East and rising demand in developing countries. More expensive oil sent gas up to nearly $4 a gallon nationwide, though both oil and gas prices have ticked down in the past few weeks. Gas averaged $3.78 a gallon yesterday, according to AAA.

Higher prices for energy and raw materials have also left businesses increasingly cautious about hiring and expanding. And growth in manufacturing output weakened last month, in part because the March earthquake in Japan disrupted supplies of electronic components and other parts. Those disruptions have also reduced auto production and sales.

The nation’s unemployment rate stands at 9 percent. It’s expected to dip to 8.9 percent for May, but most economists will be focused on the job-creation figures.

In recent days, economists have sharply reduced their expectations for hiring in May. Nomura Securities now projects a gain of 85,000, down from 175,000 earlier this week. The consulting firm High Frequency Economics cut its estimate to only 50,000, from an earlier target of 200,000.

Those figures are much lower than average job gains of about 230,000 in the past three months.

A slowdown in hiring could weaken the economy for the rest of year, even as temporary factors such as the disruptions from the Japan earthquake fade.

“We do believe there’s a slowdown in the underlying momentum of the economy,’’ Meyer said.

Fewer jobs could cut into consumer spending, threatening overall growth for the rest of this year and next, Goldman Sachs economist Jan Hatzius wrote in a note to clients.

The stock market was mixed yesterday, a day after it fell by the sharpest amount since August due to rising concerns over the economy.

Nariman Behravesh, chief economist for IHS, said the economy will pick up once gas prices decline further and Congress and the White House resolve their conflict over the debt ceiling.

When the debt-ceiling issue is resolved, he said, “businesses might feel less uncertainty about the outlook and be more willing to get out there and invest and hire.’’