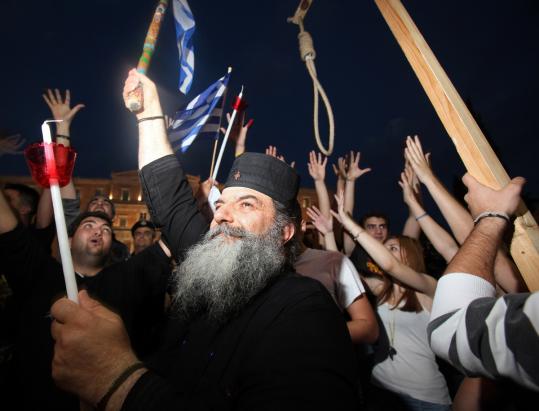 Protesters attended a rally against new austerity measures in front of Parliament in Athens. The wage cuts and tax increases under Greece’s bailout have led to strikes. (Matt Cardy/ Getty Images)
By Maria Petrakis Bloomberg News / May 31, 2011

EU and International Monetary Fund officials will conclude within days a review of whether Greece has made enough progress to receive the fifth installment of its $157 billion. To secure the funds, Papandreou unveiled last week more budget cuts and speedier asset sales, but failed to get the multiparty support demanded by the EU and IMF.

Greece’s inability to meet the deficit-reduction goals of the original bailout forced Papandreou to present a fifth round of budget cuts.

The $111 billion initiative includes stepped up state-asset sales and $40 billion of budget cuts through 2015. Bondholder losses are mounting as the yield gap between 10-year Greek bonds and German bunds reached a record last week.

“It will take a long time to enact the privatizations and will be politically controversial,’’ said Martin Blum, co-head of asset management at Ithuba Capital in Vienna. The EU and IMF “want to ensure that politicians don’t try to score points, and it’s also clear the government is losing support and sooner or later a change could occur,’’ he said.

With Papandreou’s term due to end in 2013 and polls showing New Democracy gaining support, EU officials are calling for cross-party backing for any multiyear package in return for more aid.

The wage cuts and tax increases under Greece’s bailout have led to strikes, driven the economy into recession for a third year, and boosted unemployment to a record.

Papandreou had a setback on Friday in his effort to secure more emergency funds after New Democracy, the main opposition party that he has accused of driving Greece’s economy to near-bankruptcy, refused to back the austerity plan. New Democracy leader Antonis Samaras said he wouldn’t be blackmailed into accepting the measures after meeting with Papandreou and other political leaders in Athens. European Union Economic and Monetary Affairs Commissioner Olli Rehn followed up by saying it was “essential’’ for all parties to support the program and “time was running out.’’

The extra yield that investors demand to hold 10-year Greek bonds relative to similar-maturity German bunds climbed to 14 percentage points on May 23, as Papandreou’s Cabinet met for seven hours before announcing the latest austerity package. The bonds yielded 16.44 percent yesterday, more than twice the level before last year’s EU-led bailout, while the rate on the country’s two-year securities was 25.3 percent.

The terms of the Greece bailout must be renegotiated, Samaras said in an interview yesterday with state-run NET TV. He backed Papandreou’s plans to fight tax evasion and sell state assets, though he called for tax cuts to stimulate growth.

“We aren’t talking about renegotiating the targets but the interim stages and ways to achieve these,’’ he said.

The country’s high borrowing costs mean Greece won’t be able to sell $38.5 billion of bonds in 2012 as scheduled under last year’s rescue. That financing gap prompted the IMF to threaten to withhold its portion of the $17 billion aid payment due in June until the EU says how it will meet next year’s funding shortfall.