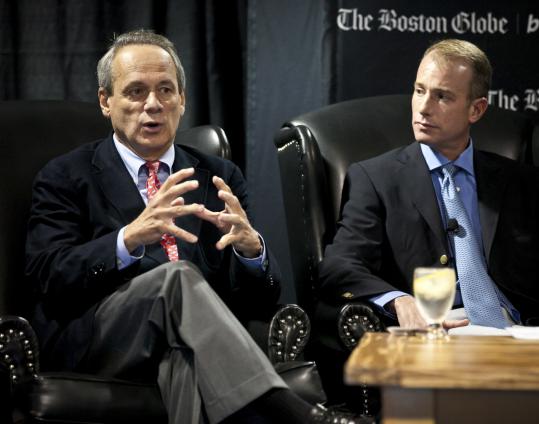 Red Sox CEO Larry Lucchino (left) and Bruins principal Charlie Jacobs were among the speakers yesterday at a panel discussion on “The Business of Sports’’ at the Hynes Convention Center. Executives focused on such issues as stadium amenities and ticket prices. B9 (Aram Boghosian for The Boston Globe)
By Alexa McMahon Globe Correspondent / May 26, 2011

The leaders of Boston’s sports franchises acknowledged that high ticket prices make it difficult for fans and families to see many games, and suggested some creative ways to offer more tickets at low prices.

Principals from the ownership groups of the , , and appeared at a panel on the business of sports yesterday morning at the New England XPO for Business at the Hynes Convention Center in Boston. Given the economics of the business, each executive said his team is focusing on getting more revenue out of deep-pocketed fans who are willing to pay more for additional game amenities.

The executives said the luxury amenities increasingly help pay for the high overhead of running a sports team and improvements to the facilities. Those revenues also act as a buffer to keep ticket prices for rank and file fans from rising even more.

“The reality of sports today is you need the revenue if you are going to put a championship team on the field. It is a balancing act every day,’’ said Stephen Pagliuca, one of the owners of the Boston Celtics.

The panel, which was sponsored by The Boston Globe, also included Jonathan Paris, executive director of Massachusetts Sports Partnership, and Patrick Moscaritolo, president and chief executive of the Greater Boston Convention and Visitors Bureau.

Boston Bruins principal Charlie Jacobs cited one example of how the team is spending money in order to compete for well-heeled fans, who expect modern facilities. “We are in a process of doing a $7 million upgrade to the Garden’s premium areas in particular,’’ Jacobs said.

The teams also said they’ve been able to keep some ticket prices low and are searching for other ways to make the games affordable.

“We’ve got to make more of an effort to have specialized programs for students, for charities, for families in military,’’ said Larry Lucchino, chief executive of the Boston Red Sox. (Globe owner, The New York Times Co., owns around 17 percent of the venture that owns the Red Sox.)

Another suggestion came from Mayor Thomas M. Menino, who spoke at the event. “Perhaps a corporate sponsor could put up a $1,000 to take 200 city kids to the game,’’ Menino said.

But the panel members also cautioned that high prices are a byproduct of having so many successful sports franchises in Boston. Nearly five million fans went to Sox, Bruins, and Celtics games last year, contributing $300 million to the local economy, Menino said in his opening remarks.