Single-family home sales fell 28 percent in comparison with April 2010, marking the third consecutive month of slower year-over-year sales, according to Warren Group, a Boston company that tracks local real estate. For the first four months of the year, sales of single-family homes were off nearly 16 percent compared with the same time last year, Warren Group said.

The median sales price, or midpoint price, also dropped in April to $274,000, about 4 percent lower than the same month in 2010. It was the fifth consecutive month of year-over-year price declines across the state. Year-to-date, the median sales price fell to $270,000, a 3.6 percent drop compared with the first four months of 2010.

Last year at this time, housing sales and prices were still being propped up by the now expired federal home buyers tax credit, which offered up to $8,000 in incentives. Yet the downward trend illustrated by the latest numbers still surprised some housing specialists who have described the local housing market as bouncing along a bottom rather than still falling steeply.

Edward Glaeser, a Harvard University economics professor, said he is not anticipating any major real estate trends, up or down, this year. “My view is we are in a long, static slow period,’’ he said.

Laura Schindler, a real estate agent with Century 21 Commonwealth in Wellesley, said one of the reasons for slow sales is an ongoing disconnect between what buyers are willing to pay and sellers’ asking prices.

If homes are priced in line with what the market will bear, buyers are quick to jump, Schindler said. Also, she said, people are looking for homes that require minimal work. “They don’t have the extra cash to fix something up,’’ she said.

Selling a house also took longer in April, according to the Massachusetts Association of Realtors, which released its own data yesterday. It took an average of 151 days to sell a single-family house in April compared with 123 days during the same month last year, according to the Waltham-based nonprofit.

Condominium sales fared a little better — on average, a condo sold within 135 days last month, compared with 133 days in April 2010.

Condo prices for the first four months of the year remained steady at $250,000, a nearly 2 percent increase from the same time last year. But the number of condo sales dropped significantly — nearly 37 percent compared with April 2010.

Some real estate agents and housing specialists still harbor hope that the housing market will warm up along with more seasonable weather. Melvin A. Vieira Jr., a real estate agent based in Milton, said he’s is already getting busier this month, which he partly attributes to buyers gaining more confidence in the economy. “I see the market changing,’’ Vieira said. 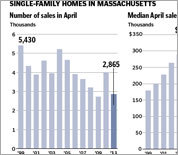