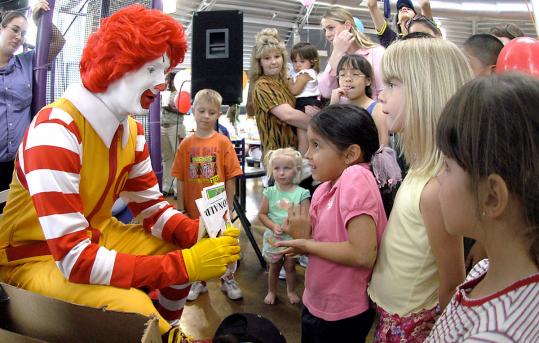 Ronald McDonald has found himself in the middle of a policy debate between health advocates and the fast food industry they say has contributed to childhood obesity. (Andrew Poertner/Roswell (N.M.) Daily Record/ File 2006/ Via Associated Press)
By Christina Rexrode Associated Press / May 18, 2011

NEW YORK — Ronald McDonald is having a midlife crisis.

His floppy shoes, painted-on smile, and flaming-red hair may be a harder sell to today’s kids who are trading in their dolls and trucks for manicures and mobile games at ever-younger ages. He also seems out of step with McDonald’s Corp.’s efforts to appeal to adults. The 48-year-old spokesclown has fallen flat in new ads this year, according to Ace Metrix, a group that tracks TV advertising.

And the government is getting strict on how food is marketed to children. That has both marginalized Ronald as more of a mascot than a product pitchman and landed him in the middle of the bigger debate about food makers’ responsibilities in stemming the rise in childhood obesity.

McDonald’s says it is proud of the food it offers and that Ronald teaches children to be active, but critics say it’s time to hang up the yellow jumper.

A group called Corporate Accountability International plans to ask Ronald to retire at the company’s annual meeting tomorrow. They say Ronald encourages kids to eat junk food, contributing to a rise in childhood obesity and related diseases such as diabetes.

The group, which campaigned against the Joe Camel cigarette mascot in the ’90s and complained about Ronald at McDonald’s annual meeting last year, has stepped up its campaign. The group has taken out full-page ads in the Chicago Sun-Times, New York Metro, and four other papers to call for his departure. The ads, signed by more than 550 health groups and professionals, carry the headline, “Doctors’ Orders: Stop Marketing Junk Food To Kids.’’

McDonald’s defended Ronald against the group’s attack at last year’s annual meeting and is adamant that it has never considered retiring or even downplaying their smiling mascot.

While other clowns have faded, Ronald has endured. He has been immortalized as a Beanie Baby, a bobblehead, and a balloon in the Macy’s Thanksgiving Day Parade. Even now, Zagat says he’s the most popular fast-food mascot, beating out Jared the Subway Guy.

But Jack McKee, vice president of sales and marketing at Ace Metrix, said new Ronald McDonald commercials have failed to entice test audiences. His company surveyed 500 people about each commercial, he said.

“It’s really remarkable how often I saw the word ‘creepy’ ’’ in the survey comments, McKee said.

Replies Peleo-Lazar: “For everyone who may feel that way, there are more who feel the opposite.’’