Signing away half their fortune 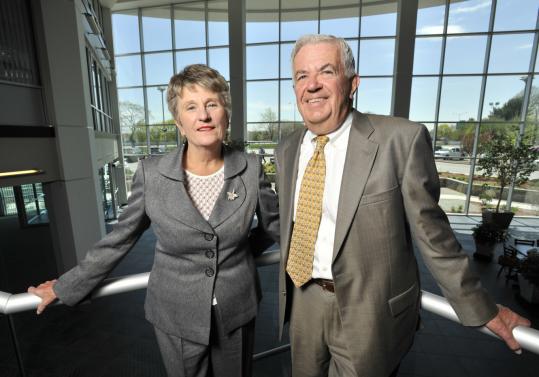 Joyce and Bill Cummings of Winchester have been donating to causes and organizations for a quarter-century. (Josh Reynolds for The Boston Globe)
By Calvin Hennick Globe Correspondent / May 10, 2011

Bill and Joyce Cummings don’t live on a sprawling estate, own a jet, or otherwise flaunt their wealth, but the Winchester couple will soon start acting more like billionaires Warren Buffett and Bill and Melinda Gates.

Earlier this month, the Cummingses became the first people in Massachusetts to sign the Giving Pledge, promising to donate at least half of their fortune to charity. The pledge was established last year by Buffett and the Gateses to encourage the super-rich to share their wealth.

Signing it “was a pretty easy thing for us to do,’’ Bill Cummings, 74, said in an interview. “It’s what we’ve expected to do for a long time.’’

Indeed, the decision was in keeping with the couple’s history of giving. Their Cummings Foundation, created in 1986, has grown to be one of the largest philanthropic foundations in the state.

“They’ve almost behaved as if the money really wasn’t theirs from the very beginning,’’ said Lawrence Bacow, president of Tufts University, whose institution has benefited from their generosity. “They’ve been stewards for it.’’

David Leland, a friend and financial adviser to the Cummingses, said many of their acquaintances would be shocked to find out the extent of their wealth. Bill Cummings declined to divulge the couple’s net worth, but the Giving Pledge is meant for billionaires — or people who would be billionaires “if not for their giving.’’

Bill Cummings said he was raised to be thrifty. The family’s first home, in Medford, was a one-bedroom apartment over a liquor store.

“My dad was a house painter, and he worked hard for his money,’’ he said.

Neighbors describe Bill and Joyce Cummings as well-known in Winchester, well-liked, and unassuming. “They do not live to show their money,’’ Leland said. “Their goal for the last 25 years has been to see how much money they can make to give away to the causes they care about.’’

In about 1966, Bill Cummings paid $10,000 for his first business, a company that supplied fruit punch to colleges and health care institutions. In the early 1970s, he sold it for just more than $1 million.

Over the years he’s been involved in other businesses — for example, he founded and was publisher of three community newspapers — but Cummings made his fortune in commercial real estate. By 2005, when he stepped down from the day-to-day management of his development company, Cummings Properties LLC in Woburn, it was taking in more than $90 million a year in leasing fees from a combined 8 million square feet of commercial space, mostly along Route 128.

Although he no longer draws a salary, he still visits the company’s headquarters in Woburn, where he sometimes sweeps the sidewalk out front.

Through the Cummings Foundation, the couple has made donations to various causes and organizations, including a $50 million commitment to Tufts University’s veterinary school, which now bears their name.

They have donated much of their commercial real estate to the foundation. Today, it has about $903 million in assets.

Once that total hits $1 billion — probably within two years — the couple intends to cap its growth and use any surplus money to fund a second foundation, which will make grants to community groups. Bill Cummings said he doesn’t know how much it will give or who will get those funds, but the money will probably stay close to home.

“It will be more local, more New England, than the rest of the world,’’ he said. The goal, he said, is to eventually donate 90 percent of the family fortune to good causes.

Many of the causes the couple targeted are connected to their personal lives. For example, in 1989 they started the nonprofit New Horizons assisted living center in Woburn as a way to contribute to the town where they built their business success. They later started a similar facility in Marlborough, and over the years have invested about $30 million in the two centers.

To honor a colleague who died at an early age, the couple set up a scholarship program that has given away $1.9 million since 1997.

And inspired by a 2009 trip to Israel, they decided to commit $10 million to fund Holocaust and genocide education programs at colleges and universities, including Tufts. During their visit, the Cummingses heard Holocaust survivor Eliezer Ayalon speak at the Yad Vashem museum of the Holocaust in Jerusalem.

The decision to get involved in educating students about the Holocaust was made on the flight home from Israel, said Joyce Cummings. “We looked at each other and said, ‘We have to do something. We can’t just go back home to our happy-go-lucky life,’ ’’ she said.

Dennis Clarke, chief executive of Cummings Properties, said the couple has never sought to call attention to their charitable efforts. “They do it because they want to, and I think it genuinely makes them very happy to do good work,’’ he said.

Take the Beacon Grille, a restaurant established by the couple in Trade Center 128, a Cummings Properties development in Woburn.

All of the restaurant’s profits are donated to charity; it supported a group of 20 students from New England who traveled to study at a community for orphaned youth in rural Rwanda, for example.

“There’s a point at which it doesn’t make any difference to earn more money. We are much more interested in doing things in the community,’’ said Bill Cummings. “It’s very satisfying to do good things with what you have.’’

Johnny Diaz of the Globe Staff contributed to this report. 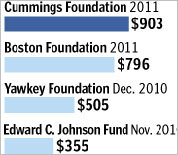