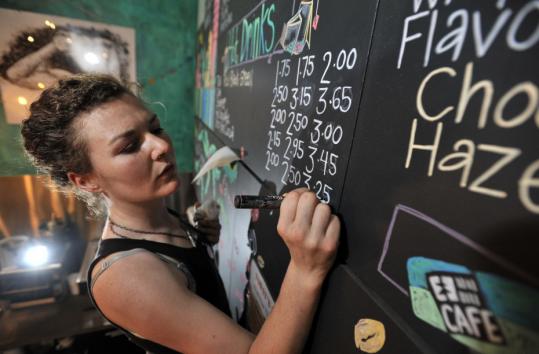 There’s a jolt hitting coffee drinkers, and it isn’t just the caffeine.

The price of coffee beans is at a historic high, as droughts and heavy rain in the world’s leading coffee-producing regions limit supply, while a growing taste for coffee over tea in Asia fuels demand.

Restaurants and cafes have raised their prices, tacking on anywhere from 5 to 20 cents a cup in recent weeks. The escalating price of the popular Arabica bean has affected almost all coffees, from Maxwell House to organic blends.

“I’ve been here for five years, and this is the most significant increase,’’ said Dave Maffucci, a barista for a Peet’s Coffee and Tea in Wellesley, one of five locations the chain has in Massachusetts. Two weeks ago the price of a large cup of joe went up 20 cents to $2.25, a 10 percent jump.

So far, few business owners have reported a decline in sales or a customer backlash. Coffee drinkers, it seems, are a loyal — or addicted — bunch.

“Even during the Great Depression, coffee sales didn’t drop,’’ said Meghan Hubbs, co-owner at Equal Exchange, a West Bridgewater fair-trade roaster and importer that supplies beans to 70 cafes and restaurants in the state and owns cafes in Boston and Seattle.

“In the long run, a specialty coffee drink is not going to be the thing people are going to take a hard look at,’’ Hubbs added.

The price hike is the result of more than just floods and droughts in coffee-growing areas. Also contributing is a weak US dollar, rising prices for fuel and fertilizer, and speculation in the coffee bean market.

And as emerging markets like Asia develop a java jones, global demand skyrockets. Starbucks, for example, plans to open 1,500 stores in China by 2015.

Last week the price of Arabica bean per pound surged to $2.88 on the C market, the global commodity futures market that sets prices for green Arabica beans, compared to $1.38 a year ago.

Coffee experts say the increase indicates that the beverage has become more valuable.

“We’ve gotten used to a really cheap cup of coffee. It’s not really an accurate reflection of someone’s labor,’’ said Daniele Giovannucci, cofounder of the Committee on Sustainability Assessment, a consortium that measures the impact of agricultural practices across the globe. “This price level is a way of finally valuing what is an extraordinary crop.’’

A decade ago, “you could never sell a cup of coffee for more than a dollar,’’ said Giovannucci. “Now we have $4 lattes. People are surprised by the evolution of what consumers are willing to pay.’’

Some big chains like Dunkin’ Donuts and McDonald’s have been able to hold down prices because they buy in bulk and their size gives them purchasing power.

And in some cases, franchisees absorb the costs.

Clayton Turnbull, who owns 18 Dunkin’ Donuts in Greater Boston, has not raised his prices since the beginning of the year. “We’ve taken a hit and hope we can outrun the trend,’’ he said. His strategy is to lure customers in with other products to offset the increase.

But many coffee vendors have gone with price hikes, another hit for consumers who are already faced with record-high food and fuel costs.

“We’ve been brewing more coffee at home and driving a little less,’’ said Paul Simmons of Somerville, who started curtailing his cafe visits when the price of coffee started to creep up last year. “Most people trying to keep a budget have realized they’re getting squeezed more.’’

Some, nevertheless, are inured. “To pay these prices for coffee is ridiculous,’’ said Dover coffee drinker Andrea diMarco, “but I still won’t cut it out.’’

Still, raising prices can be nerve-racking for owners. Rebecca Fitzgerald, chief operating officer for George Howell Coffee Company in Acton, said the business employs a formula based on whether it thinks coffee bean prices will remain high. Then the company factors in other costs, from labor to rent to the price of cups and cream.

With all that in mind, the company is weighing a 15- to 25-cent price increase at Taste Coffee House in Newton, a cafe the company manages. “You have to balance margins and think about retaining customers at the same time,’’ Fitzgerald said. “There’s also a gut feeling of what I can do and not lose my customers.’’

Starbucks Corp. began rolling out price increases on specialty drinks in October. In March the company bumped packaged coffee up 12 percent in grocery stores. But the Seattle coffee giant has “no plans to take other pricing increases right now,’’ said Starbucks spokesman Alan Hilowitz in an e-mail.

Even though Starbucks recently reported a 10 percent revenue increase in its second quarter, analysts say all coffee companies are proceeding with caution.

“What Starbucks doesn’t want to do is wreck a year of market-share gains by jacking up the price,’’ said restaurant equities analyst Steve West, of Stifel Nicolaus & Co. in St. Louis.

It’s not just designer coffee that’s costing more. The price for a bottomless cup of joe at Charlie’s Sandwich Shoppe in the South End went up 20 cents to $2.25 in April and “no one’s said a word,’’ noted Marie Fuller, who runs Charlie’s with her family. Customers, she figured, are used to seeing prices go up.

Ruined bean crops and higher food prices are affecting the cost of coffee.
Your comment is subject to the rules of our Posting Policy
This comment may appear on your public profile. Public Profile FAQ