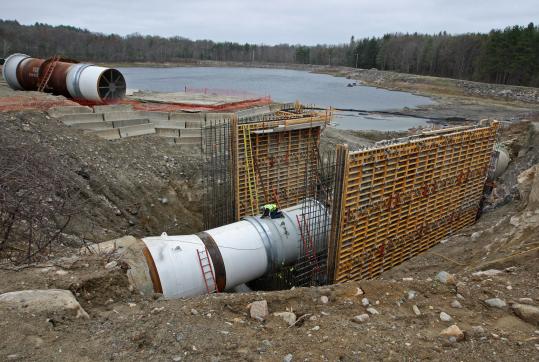 Workers on the job at the Hultman aqueduct in Weston. In the background is a pipe from the old section of the aqueduct. (Jim Davis/Globe Staff)
By Beth Daley Globe Staff / May 2, 2011

The Massachusetts Water Resources Authority is preparing a multimillion-dollar lawsuit against several companies for the catastrophic water main break last year that cut off clean water to nearly 2 million Boston-area residents for more than two days.

The region’s water supplier says a panel has nearly completed its investigation of the massive leak a year ago this past weekend — one of the nation’s most disruptive water distribution failures in recent memory. It is expected to detail how a steel coupling failed at a critical, high-pressure juncture of two 10-foot-diameter water mains.

The report, based on a forensic analysis of recovered pieces of the clamp and parts of several studs that held it together, is expected to be released within the next two weeks.

“Something went horribly wrong and the report will [say] what went wrong and why, and shortly after there will be a lawsuit and we will be in court,’’ MWRA executive director Fred Laskey said in an interview. He said the MWRA was not to blame for the rupture.

The state’s hope is that successful legal action could recover the millions of dollars it cost to fix the rupture and coordinate extensive emergency measures.

Laskey declined to name the parties in the lawsuit until the report is made public, or exactly how much was spent on the crisis. But several entities had a hand in designing, engineering, and installing the roughly one-ton coupling eight years ago, or overseeing and approving the work. The Globe attempted to contact most of the firms last week; those that responded said they did not believe they were responsible, with one suggesting the MWRA was at least partly to blame.

It was a Saturday in early May when the coupling began leaking at least 20 feet under the ground by the interchange of the Massachusetts Turnpike and Route 128 in Weston. It quickly worsened — a geyser burst through the ground, creating a crater and ultimately sending about 265 million gallons of water, and tons of soil, into the nearby Charles River before the flow was turned off.

The clamp helped connect a new MetroWest water tunnel to an older tunnel carrying water from the Quabbin and Wachusett reservoirs on the last leg of its journey into Boston.

While officials were able to reroute other water into the system for fire protection, bathing, and flushing toilets, some of it was not treated enough to meet federal drinking water standards, prompting a boil-water order for Boston and 29 communities east of Weston. Water tests later showed most of the water was safe to drink during the crisis.

The failed clamp was not the project’s first design choice. The pipes were originally supposed to be much more rigidly connected and encased in concrete, but that method had to be dropped because the pipes didn’t perfectly align.

That led project designers to shift to the clamp system, which allowed the pipes some freedom of movement. The first clamp installed failed water-pressure tests, and a second slightly different version was then used, according to Globe reports.

While such design changes are not uncommon during construction projects, they have become a key area of interest by the MWRA after the leak because of the second clamp’s failure. The coupling, called Depend-O-Lok, was manufactured by Pennsylvania-based Victaulic, which develops pipe joining systems.

Victaulic issued a statement Friday saying in part that the company has “consistently and openly communicated to the MWRA that the system failed due to multiple factors — factors that were under the planning, control and management of the MWRA.’’

For example, the statement noted, there appear “to be inconsistencies in their design plans and drawings as well as proper soil stability — areas like these and others outlined must be examined to determine the system’s compromise. . . . It is highly unlikely that one particular component of a very large and complex system independently reacted without contributing circumstances.’’

A joint venture between three companies known as Shea-Traylor-Healy was responsible for the construction of the MetroWest tunnel project section, where the clamp failed.

While that consortium did most of the tunnel work, it subcontracted other work to the joint venture of Daniel O’Connell & Sons and Barletta Engineering Corp., which then subcontracted work to Harding & Smith of Walpole, according to the MWRA.

Vincent Barletta, president of Barletta Engineering Corp., said in a statement that his company was responsible for a limited portion of the sitework and management and “we stand by the work we performed.’’

Another firm hired by the MWRA to watch over the construction site, Stone & Webster, was acquired by the Shaw Group of Louisiana, which did not respond to the Globe’s request for a comment.

The design of the clamp system was done by Sverdrup, owned by Jacobs Engineering Group of California, which declined to comment. Sverdrup also subcontracted design work to Fay, Spofford & Thorndike, based in Burlington. That firm released a statement Friday saying it was cooperating with the MWRA’s investigation and it has “no reason to believe that the coupling failure was related to the design provided by FST.’’

After the clamp broke, workers toiled round the clock to weld a new steel collar to reconnect the two sections of pipe and then encased it in concrete. After a massive search for the failed clamp, workers found it twisted below the pipe, with a single stud and nuts holding the two sections together. They were able to extract the top half and a portion of the second half. They also recovered pieces of two other studs and nuts.

It is those pieces that will serve as the foundation of the upcoming forensic report led by Wentworth Institute of Technology’s president Zorica Pantic.

Laskey says some good did come out of the catastrophe. The rupture has hastened efforts to finish a backup water system by 2013, a year earlier than it was originally scheduled to be completed. He stressed that the MWRA will work hard to recover the costs of the break from the responsible parties.

“We did due diligence, but something went wrong,’’ said Laskey. “Our goal is to make the ratepayer whole again.’’