US seeks stricter limits on food ads for children 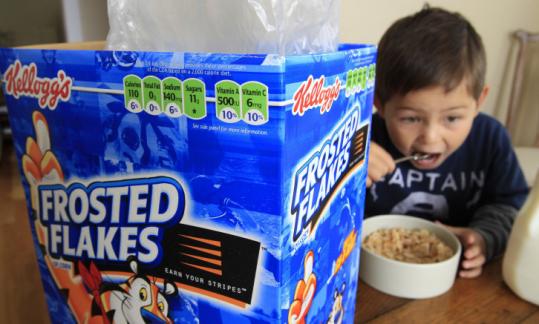 Many food companies have already signed on to an industry effort to restrict some advertising aimed at children. (Paul Sakuma/Associated Press)
By William Neuman New York Times / April 29, 2011

The federal government proposed sweeping guidelines yesterday aimed at altering how the food industry advertises its products to children, seeking to promote healthier options and restrict the marketing of foods — like sugary cereals and fast-food meals — that can lead to childhood obesity.

The guidelines, which would be voluntary, could push companies to speed up changes already underway to cut sugar and salt and add fresh fruits and vegetables and whole grains.

The proposal, released by the Federal Trade Commission, encompasses all forms of advertising to children and teenagers, including commercials on television shows, company websites, and online games that promote products, often discreetly, and even the cartoon characters that appear on many cereal boxes and other packaged goods.

The food industry immediately pushed back against the proposal, saying that it was already taking steps to address the issues. But the industry clearly felt pressured by the proposal, even though the guidelines were intended to be voluntary.

“There’s clearly a demand hidden behind the velvet glove of the voluntary language,’’ said Dan Jaffe, executive vice president of the Association of National Advertisers, a trade group that represents companies that advertise their products.

Many food companies have already signed on to an industry-led effort to restrict some food advertising aimed at children, but each company is allowed to set its own nutritional criteria, which critics say undermines its effectiveness.

Regulators said it was important for the entire industry to adhere to a uniform set of standards.

Regulators said they would take comments and consider changes before submitting a final report to Congress, perhaps before the end of the year.

The proposal envisions guidelines that would be phased in over five years or more if companies agree to accept them.

They call for foods that are advertised to children to meet two types of requirements. Both packaged foods and food served in restaurants would have to include certain healthy ingredients, like whole grains, fresh fruits and vegetables or low-fat milk. And they could not contain unhealthy amounts of sugar, saturated fat and salt.

The sugar requirement would limit breakfast cereals to 8 grams a serving, far less than many popular cereals have today.

The salt restrictions are particularly stringent, and many packaged foods would have a hard time meeting them.

The restrictions would get even tougher over time.