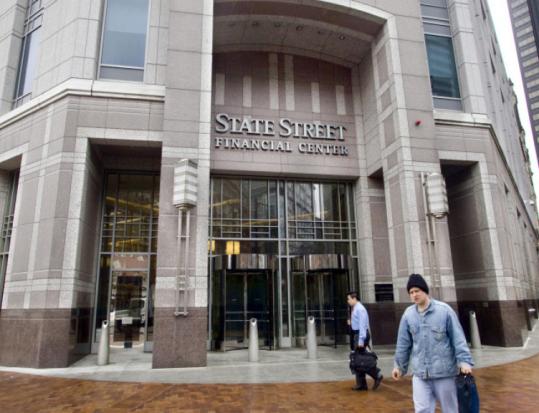 State Street’s losses on billions in risky investments “will eventually entitle us to a refund of taxes,’’ a spokeswoman said. (Michael Fein/Bloomberg News/File 2009)
By Beth Healy Globe Staff / April 14, 2011

Two years after receiving a $2 billion taxpayer-funded bailout, State Street Corp. expects to receive a federal tax refund of $885 million for 2010, the company confirmed, after taking losses on risky investments.

It’s not that times were tough: Boston-based State Street reported a $1.6 billion profit last year. The company manages money for pensions and handles accounting for hedge funds and mutual funds, and its revenues were up amid strong markets. But, like many other banks and companies, State Street was able to offset its tax bill with big losses sustained during the financial crisis.

“It’s really common,’’ said Robert Willens, a specialist in corporate taxation. “Many, many of the banks have built up losses from prior years. These companies won’t be paying taxes for many years, until such time as they become profitable and they realize all their losses.’’

State Street paid $1.1 billion in federal taxes in 2008, according to its annual report filed with the Securities and Exchange Commission. That dropped to $75 million in 2009, after the company took a $3.7 billion charge to cover investments linked to mortgages that had plunged in value. Then, in December, it announced it would sell $11 billion in troubled investments, which triggered more losses.

“That will eventually entitle us to a refund of taxes,’’ said Arlene Roberts, a spokeswoman for State Street.

As many as 30 percent of US corporations will pay no federal taxes this year, by Willens’s estimate. General Electric Co. has drawn sharp criticism for paying zero taxes, despite earning more than $14 billion last year. While ordinary Americans are rushing to file their tax returns by Monday and lawmakers in Washington are cutting budgets and resisting tax hikes, many of the nation’s largest companies are paying no taxes at all.

“Corporations like State Street paying zip despite $1.55 billion in profit is beyond an outrage,’’ said Rich Rogers, executive secretary-treasurer at the Greater Boston Labor Council. He is part of a consortium of groups that represent workers and low-income families planning a protest in the financial district today over banks and Wall Street firms failing to pay taxes, while foreclosing on homeowners and continuing to pay their executives generously.

State Street chief executive Joseph “Jay’’ L. Hooley’s total compensation last year was $12.9 million. The company’s chairman, Ronald Logue, who retired in January after overseeing State Street’s foray into risky fixed-income investments, earned $594,000 in salary and director pay. He also had a car and driver valued at $74,000, among other perks.

But State Street was profitable last year. Some other big banks that are not paying income taxes this year, notably Bank of America Corp., lost money in 2010.

State Street reported in SEC filings that it paid $15 million in state taxes and $156 million in taxes to foreign governments. But it deferred $1.2 billion in federal, state, and non-US taxes for a future time, an accounting practice that is widely used, tax specialists said.

For State Street and other companies, carrying forward large losses puts a positive spin on news that battered their stocks when it came to light over the past few years. Now that the losses have been recognized, Willens said, “They take on a positive tone because they can be used to shelter future profits from taxation.’’

State Street was among the nine largest US banks that the federal government required to take a capital infusion in the fall of 2008, because they were deemed critical to the financial system. The company repaid its $2 billion in Troubled Asset Relief Program funds in June 2009 and recently received approval from the Federal Reserve to reinstate its dividends to stockholders, to 18 cents a share from a penny.