Legal goes to the next levels 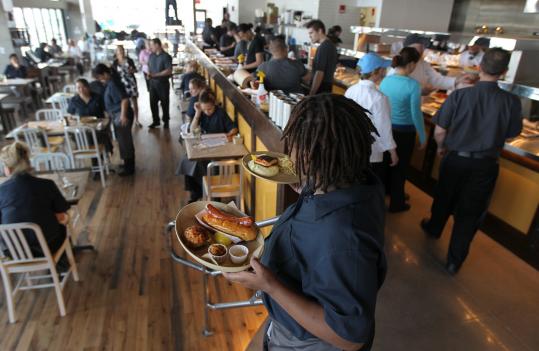 Legal Sea Foods is planning to open the largest restaurant in Boston today, a place where sea urchin and champagne meet burgers and beer.

The 20,000-square-foot, 600-seat restaurant at Liberty Wharf, called Legal Harborside, has three distinct dining areas. Tuna melts, pizza, and small plates are served on the ground floor, which features a fish market and a catch-and-release trout pond for kids. The second level is a high-end dining room with unusual seafood and 46-ounce bone-in rib eyes. Up top, a deck with a retractable roof, outdoor fireplace, and an oyster bar will be open year-round.

The company plans to open the first floor this afternoon; the other two levels are expected to open next month.

The Harborside is the latest offshoot of the 61-year-old company, which has been focusing on more casual versions of its traditional seafood restaurant designed to appeal to the twenty- and thirtysomething crowd. In the past six years, the company has launched two Legal Test Kitchens, known as LTK, in Boston featuring dishes such as pumpkin ravioli and lobster mac and cheese. Three Legal C Bars, with an emphasis on seafood and craft cocktails, have opened in Boston, Dedham, and at the Philadelphia airport.

“All businesses have to evolve; if they don’t, they become obsolete,’’ said chief executive Roger Berkowitz, who has expanded his family’s Inman Square fish market into a mini empire of 32 restaurants up and down the East Coast. “What appeals to kids growing up today is not necessarily something that appealed to kids growing up 50 years ago.’’

The Harborside — located at the site of the old Jimmy’s Harborside Restaurant and designed with a ship in mind, with a staircase spiraling between the industrial hull, the dining room, and the promenade deck — is the first of its kind. The restaurant is situated alongside three other new establishments — Jerry Remy’s Sports Bar & Grill, Temazcal Tequila Cantina, and Del Frisco’s Double Eagle Steak House, which opens later this month. A fifth restaurant has not yet been named.

The water will be a big draw for these restaurants, said Vivien Li, executive director of the Boston Harbor Association, a waterfront advocacy group, with maritime views and the HarborWalk path winding by. “People just love watching the ships come in,’’ she said. “There aren’t too many places on the waterfront you can do that.’’

Legal, which serves about 8 million people a year, has transformed along with restaurants around the country as people have started em bracing healthier, less formal dining, preferring to share small plates at the bar instead of poring over leather-bound menus offering steak and lobsters.

Restaurants have to keep up with this healthy discontent, adding new concepts to keep diners interested — especially young adults, who eat out more than any other age group, said Harry Balzer, a restaurant analyst with the NPD Group market research firm. “We love new things, but only if we already know them,’’ he said.

The first floor of the Harborside will have an irreverent “controlled three-ring circus’’ atmosphere, Berkowitz said, with counter seating ringing the open kitchen; a take-out area with raw fish, sushi, and sandwiches; and a pond where — if all goes as planned — kids can drop in lines to hook locally raised trout. Not far from the pond, a three-story waterfall will cascade down a wall of metal fish scales.

Earlier this week, chefs served up plates of fried scallops and tuna crudo to servers taking turns waiting on each other. Hostesses practiced seating — “How many in your party, sir?’’ — while bartenders mixed up purple vodka drinks behind a large circular bar and construction workers glued glass mosaic tiles on the wall. When all three floors are open, the Harborside will have 350 employees.

Legal’s new direction was inspired by an unlikely muse: Logan International Airport. The Massachusetts Port Authority, which runs the airport, pushed Legal to open a small restaurant there 15 years ago, and the result was an “oyster bar on steroids,’’ Berkowitz said. Logan is also where Legal opened its first LTK, in 2005, and its first Legal C Bar two years later.

“It opened up a whole new world for us,’’ said Berkowitz, 58, noting that one of his restaurants at Logan, a 1,600-square-foot store in Terminal B, has more sales per square foot than any other Legal restaurant. “Airports taught us a lot that we didn’t think we could do.’’

A dip in business during the recession drove Berkowitz to further push the development of LTKs and Legal C Bars, which have lower price points. Their late-night hours — the LTK across the street from the Harborside is open until 2 a.m. on weekends — also bring in a younger crowd. (Berkowitz said he isn’t worried about competing with the nearby LTK because the two restaurants have such different atmospheres.)

There’s no question that Berkowitz likes to stand out. He launched an advertising campaign a few years ago that his own mother objected to, but he held firm. “Please don’t take offense, but you’re a dying demographic,’’ he recalls telling her. “I have to appeal to the next generation.’’

No matter how hip the restaurants try to be, though, Berkowitz has his limits. He relaxed his policies on tattoos and men with earrings at LTK and Legal C Bar, but he drew the line at pierced tongues after being waited on by a Harborside server with a silver stud in his mouth.

“I feel funny about it,’’ he told several of his executives during a preopening meeting on Monday. His general manager assured him the stud would be removed.

Photos: From Jimmy's to Legal at Liberty Wharf