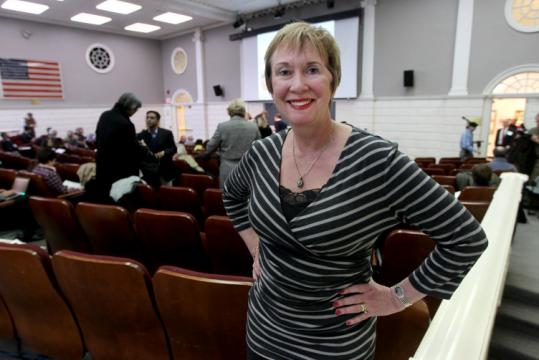 Charles Denham is not your typical Harvard University student. At 55, he has already established a career as a doctor and has founded a technology company and a nonprofit medical research enterprise. On top of that, he commutes to Cambridge from his home in California.

But Denham is indeed attending Harvard, as part of the school’s Advanced Leadership Initiative, a yearlong fellowship for people with 20 or more years of leadership experience who, instead of retiring, want to spend the next phase of their lives starting socially conscious ventures. Fifty-five fellows have paid roughly $50,000 each to get help leveraging their past experience into starting new and meaningful projects.

“Racehorses want to run races. You put a racehorse out to pasture, they get depressed,’’ said Denham.

Rosabeth Moss Kanter, a Harvard Business School professor and director of the program, sees it as a third stage of higher education that will create a kind of senior corps with the leadership skills — and often the money — to make a difference in the world.

“This is when a good game of golf is not enough,’’ said Kanter, who plans to encourage other universities to institute similar programs during a leadership conference in June. “Undoubtedly we have a lot of brain power wasted.’’

That brain power continues to build as baby boomers, one of the largest generations in history, representing a quarter of the US population, look toward retirement and increasingly longer lives. A number of community college programs and support groups have sprung up to help people make the transition into second careers in education, health care, and the environment, and Harvard’s Leadership Initiative is at the forefront, said Marc Freedman, founder of Civic Ventures, a think tank encouraging baby boomers to take up work with a social purpose.

“The Harvard program is a kind of beacon,’’ said Freedman, who mentions it in his new book, “The Big Shift,’’ about the years stretching out between midlife and old age. “It contains the seeds of a whole new social institution: essentially school for the second half of life.’’

Denham, the California doctor, enrolled in 2008, the year the program started, and quickly put what he learned to good use. He has since produced a Discovery Channel documentary about medical errors starring actor Dennis Quaid, an effort he says has “100 percent’’ saved lives, and begun work on three more health care documentaries as well as a leadership fellowship for health care providers — all of which came out of his experience at Harvard. After his official graduation in 2009, he continues attending intensive courses and supervising students as a senior fellow.

The idea for the Harvard program came from conversations between Kanter and two of her colleagues, who saw a need for stronger leadership in an increasingly globalized world and an opportunity in the ranks of the boomers. About 20 fellows are accepted every year based on their record of leadership and dedication to finding solutions for societal problems.

The fellows, ranging from a retired Marine Corps general to a Nigerian senator to the former president of Trader Joe’s, attend weekly seminars during the school year taught by Harvard professors of law, education, government, and business on topics such as “hard’’ and “soft’’ styles of leadership. They participate in think tanks about poverty and technology and go on field trips to places such as Sao Paulo, where one class met with micro-lending clients in the slums.

The fellows also audit Harvard classes, meet with professors, and enlist students to help with their projects. Many rent apartments in Cambridge and commute home on the weekends; some bring their spouses, who also can audit Harvard classes as a “partner’’ in the program.

Robert Whelan, 59, started his 2009 Harvard fellowship with a “not even half-baked’’ idea for helping low-income students pay for college and honed it as he learned how to write a business model for a nonprofit and “unlearned’’ corporate practices such as not sharing big ideas. At a think tank, Whelan got his business card in the hands of US Deputy Secretary of Education Tony Miller.

Whelan, a former Boston investment banker, is now in the process of setting up a national nonprofit organization called 13th Avenue Funding that gives a group of students $20,000 apiece for college. After graduation most have to give back 6 percent of their annual income for up to 15 years — 5 percent to repay the debt and 1 percent to fund future groups. Unlike with a traditional student loan, the group repays the debt collectively, with high-income earners paying the most and those who make less than $18,000 a year paying nothing.

“I have felt more passionate and connected, and I’ll give the Harvard program some credit, to what I’m doing today than I ever did as an investment banker,’’ Whelan said. “And I had a great career.’’

Rich Fahey learned that he had to become a new kind of leader at Harvard — one that can no longer snap his fingers and have an employee meet his every need. Fahey is setting up a corporation to sell low-cost solar-powered lamps to churches and other community groups in Liberia — where only a few thousand homes have electricity — which will mark them up and sell them for a profit. The company will teach the retailers how to market the lamps, provide repair services, and guarantee their performance.

Fahey, 66, a former environmental lawyer who was a Peace Corps volunteer in Liberia in the 1960s, said the resources and feedback he received at Harvard enabled him to make the leap, which he acknowledges is a risk at his age.

“If I make a huge financial blunder, if I was 23 years old, I’d have years to correct it,’’ said Fahey, who lives in Santa Fe, where he is a volunteer firefighter. “But now we’d be living over the kids’ garage eating pet food.’’

Gale Pollock, a former Army nurse who worked her way up to acting surgeon general of the Army, said the Harvard program is giving her the time to ponder topics such as how to bring health care to underserved areas.

“It’s such an incredible opportunity to expand the way that you think,’’ said Pollock, 56, who is a few months into the program and wants to create a Web clearinghouse to help enrich the lives of people with limited eyesight, including social etiquette for assisting people with vision impairments.

“For me it’s always been, to whom much is given, much is expected.’’