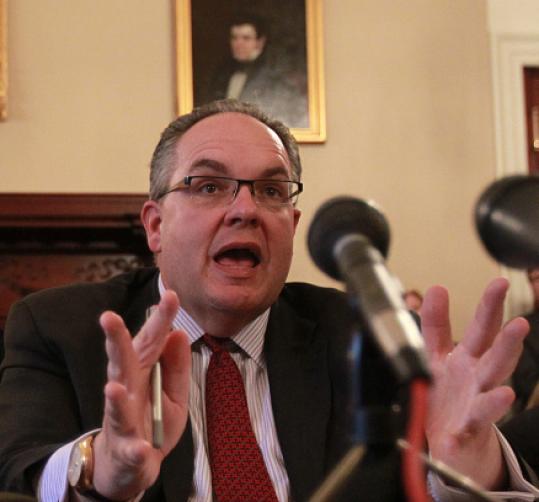 Executives from Fidelity Investments and Evergreen Solar Inc. defended their decisions to eliminate or move hundreds of jobs out of Massachusetts, despite receiving tens of millions in tax breaks from the state, at hearing on Beacon Hill yesterday.

But the explanations they offered didn’t appease the state senator who scheduled the hearing, New Bedford Democrat Mark Montigny, chairman of the Senate Post Audit and Oversight Committee.

For example, Ronald O’Hanley, Fidelity’s president, declined to tell Montigny how much the Boston financial services giant has benefited from a tax break in 1996 for the mutual fund industry.

“We honestly don’t calculate our taxes in a way other than the way we were asked to,’’ O’Hanley answered.

Meanwhile, Evergreen Solar chief executive Michael El-Hillow rejected Montigny’s demand that the Marlborough company return “every penny’’ of aid it received from the state to build a solar manufacturing plant in Devens that it has since closed. Evergreen eliminated more than 800 jobs as part of the plant closing, saying it couldn’t compete with cheaper manufacturing in China, where Evergreen recently opened a facility.

Massachusetts offered Evergreen $58 million in grants, tax breaks, and other aid. But El-Hillow noted that only about $21 million of it was in cash. He said the company complied with nearly all of the terms with the state, creating far more jobs than it promised until shutting the plant earlier this month. Moreover, he said Massachusetts probably earned a profit of $20 million from a small investment it made in Evergreen years earlier that it sold off.

“This was not a bad deal,’’ said El-Hillow, adding that the company plans to keep its headquarters in Massachusetts. “The citizens got their money back with the chance of some upside.’’

Evergreen has previously said it believes it will repay about $3 million to $4 million of the cash grants, similar to an estimate by state officials, though Evergreen said it may not be required to do so for several years.

Gregory Bialecki, secretary of housing and economic development, said his office is still negotiating with Evergreen.

“Make no mistake — we are committed to recovering every cent the taxpayer is owed,’’ Bialecki said in his prepared remarks.

The hearing came just weeks after Fidelity announced plans to close its Marlborough facility and move most of the 1,100 jobs there out of state by the end of 2012. Governor Deval Patrick and other state political leaders complained they were blindsided by the announcement.

But O’Hanley defended the company’s decision to give state leaders limited notice. He said Fidelity executives tried to reach Patrick the night before the announcement, while the governor was on a trade mission in Europe. And he said the company did not feel it could tell political leaders earlier for fear the news would leak out and employees would learn of it through the media or other channels.

“It was very important for us that rank-and-file employees find out from us and not other sources,’’ O’Hanley said.

O’Hanley also insisted the move was aimed at consolidating its New England facilities and eliminating excess space. Most of the Marlborough jobs, he added, will be relocated just across the border to facilities in Merrimack, N.H. and Smithfield, R.I., and the employees will simply have a different commute.

“In all honesty, we never expected this kind of reaction,’’ he added. “We’re consolidating real estate. This was pretty simple to us.’’

The mutual fund industry tax change, adopted in 1996, has proved a boon to companies. The state Department of Revenue estimated the mutual fund industry has saved roughly $1.7 billion over the past 15 years, including an estimated $142 million this tax year alone. Tax officials said they are barred by law from giving figures for Fidelity or any individual company.

The law allowed mutual fund companies to calculate their state income tax solely based on the amount of sales in Massachusetts, instead of using a combination of factors that included the size of their payroll.

Initially, companies had to increase their workforce by at least 5 percent for five straight years to take advantage of the tax break — a target Fidelity said it more than exceeded. But starting in 2003, the law applied to all mutual fund companies, regardless of how many jobs they added or lost.

After the hearing, Montigny said he ideally would have loved for Fidelity to say how much it has saved in taxes and for Evergreen to offer to bring in a check returning the state aid. But he said he thinks the companies’ answers underscored problems with the state’s current approach to tax incentives and could help generate broader support to change the law.

“I wanted to highlight the flaws in the current policy,’’ Montigny said. “Because my expectations were really low, I thought it was a good outcome.’’