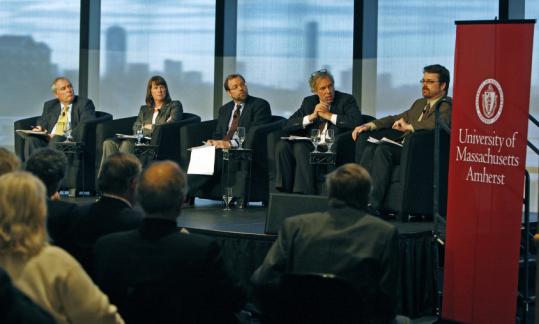 Recent increases in oil and food prices could put further pressure on the economic recovery, the chief of the Federal Reserve Bank of Boston said yesterday, citing the risk that consumers will have less discretionary money in their pockets.

“Our concern is that when food and energy prices go up, that the economy will be weaker than it otherwise would be,’’ Eric S. Rosengren said. He noted that gas prices have jumped as a result of turmoil in Libya and other oil-producing Middle East nations, and that wheat prices have risen after poor harvests in Russia and Australia.

“The Federal Reserve is very concerned about those kind of supply shocks,’’ Rosengren said during an economic forum cosponsored by the Boston Globe and the University of Massachusetts Amherst. The event was held at the John F. Kennedy Library in Dorchester.

Another economist at the event, Robert Pollin, a UMass Amherst professor, went further, calling the sudden jump in gas prices to $4 a gallon part of a speculative bubble.

“The real problem right now is the speculation, because we still have an unregulated commodities market,’’ Pollin said.

As the details of the Dodd-Frank financial overhaul law are debated among regulators, he said, it remains to be seen whether the markets will come under greater oversight to head off financial crises like the one that spurred the last recession.

All four economists on the panel said that unemployment, at 8.9 percent nationally, remains the overriding challenge for the economy — more pressing than the deficit. Jeffrey Thompson, an assistant research professor at UMass Amherst, said states should not be cutting budgets, but rather should be investing in infrastructure and education. He said deep cuts across many states have “nullified’’ the effects of the federal stimulus spending.

Rosengren said the federal deficit must be addressed over the long term. But, he cautioned, “I think we have to be careful not to go the austerity route too quickly.’’ He said the US government made that mistake coming out of the Depression, as did Japan in the late 1990s. He said strategies for deficit-cutting should come “when we get closer to full employment,’’ historically considered to be about 5 percent.

The short-term effect of deep cuts to education and other critical services today could backfire into costly problems down the road, said Lisa M. Lynch, dean of Brandeis University’s Heller School for Social Policy and Management. “Laying off an elementary school teacher today does not solve Medicare,’’ she said.

She and others argued that banks and corporations are holding on to large sums of cash, suggesting incentives are needed to encourage lending and spur job creation. “There’s a lot of cash that’s sitting on the sidelines,’’ Lynch said.