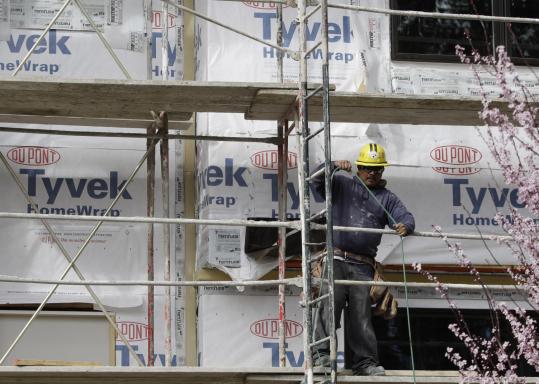 WASHINGTON — Home construction in the United States is all but coming to a halt.

Americans are on track to buy fewer new homes than in any year since the government began keeping data almost a half-century ago. Sales are now just half the pace of 1963 — even though there are 120 million more people in the United States now.

The sliding sales show just how far the housing market has fallen since the bubble burst four years ago. And they are a blow to the economic recovery as it draws strength from other places.

Diminished sales have driven the median price of a new home down to about $202,000, the lowest since 2003. If the sluggish sales continue, analysts say, small home builders will fold, meaning less competition as the market improves and higher prices later.

“The longer it goes on, the more builders will drift away from the industry altogether,’’ said Paul Ashworth, chief US economist of Capital Economics.

Ashworth said that a surge in foreclosures is forcing down prices for previously occupied homes even faster than they are falling for new homes. As a result, new homes are less attractive to buyers.

“That’s not going to change for at least another year or two,’’ Ashworth said. “Under these conditions, you can’t really see home builders willing to ramp up, and that’s bad for buyers.’’

Sales of new homes plunged in February to an annual rate of 250,000, the Commerce Department said yesterday. It was the third straight monthly drop. The pace is far below the pace economists say is healthy, about 700,000 a year.

Last year, 323,000 new homes were sold — the worst year on record and the fifth straight year of declines. Economists do not expect this year to be any better and say it could take two years or more before sales return to a healthy pace.

New homes have accounted for just 5 percent of all sales so far this year. They typically represent closer to 15 percent. There were just 183,000 new homes available for sale in February, the smallest supply in four decades.

The median price of a new home is now 30 percent higher than that of a resold home, twice the typical markup in a healthy economy.

Builders have responded by scaling back. In February, they broke ground on only about 40 percent of the homes they typically do in normal markets.

That decline in activity is weighing down the construction industry, which in the past has fueled economic recoveries. It is also slowing the broader economy. Each new home creates an average of three jobs for a year and $90,000 in taxes, according to the National Association of Home Builders.

People are still looking at new homes, builders say. But many would-be buyers say they cannot justify the cost.