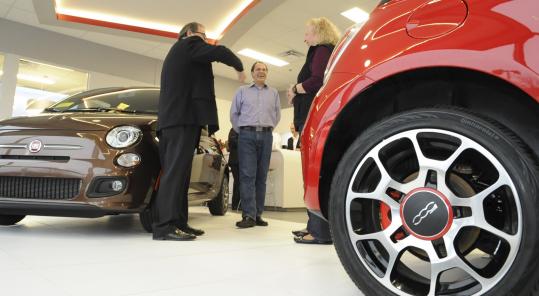 Angelo Falcone (center) of Acton and his wife, Rhonda, chatted with a salesman as they waited for the new Fiat at Kelly Fiat in Peabody. (Lisa Poole for The Boston Globe)
By Bill Griffith Globe Correspondent / March 24, 2011

The first of the new Fiat 500 hatchback cars have arrived in Massachusetts, marking the Italian brand’s return to US auto dealers after a 27-year absence.

Angelo and Rhonda Falcone of Acton were at Kelly Fiat in Danvers on Monday to pick up their new car, one of 500 “Prima Ediziones,’’ or first editions, reserved by longtime Fiat aficionados. Among the 17 at the dealership, theirs was easy to spot — at the top of the factory window sticker were the words, “This vehicle was built especially for Angelo Falcone.’’

From 1957 to 1975, Fiat sold about 4 million of the original 500 models, a lightweight car with a two-cylinder engine. Falcone, a native of Fiat’s hometown of Turin, Italy, drove the automaker’s cars when he was growing up.

“I had to go on a waiting list’’ for the new 500 hatchback, he said. “Fortunately I was at home, working online late one night, when I got the e-mail that there had been some cancellations.’’

Fiat has sold half a million 500s in 80 countries in the past four years, and the company hopes the US model — which packs a larger engine and stronger body shell — will be a retro-styled hit like the popular Mini Cooper and Volkswagen’s New Beetle. The tiny subcompact is 7 inches shorter than a Mini Cooper and arrives just as automakers are bringing similar smaller, European-market cars to the United States, including the Chevrolet Cruze and Ford Fiesta.

In 1984, Fiat, finding it hard to meet US government regulations and with a reputation for unreliability, pulled out of the US market. Now, after acquiring a stake in Chrysler during the Detroit automaker’s 2009 bankruptcy — when nearly 800 Chrysler dealers were ordered closed — Fiat has been preparing to reenter the US market.

The Kelly dealership is one of four Chrysler dealerships in Massachusetts (out of 130 nationwide) that will sell the brand, after agreeing to create a separate Fiat showroom and sales staff.

“It was a very competitive process,’’ said Brian Kelly, president of Kelly Automotive Group. He said he expects to sell about 400 Fiat cars this year.

Over the winter, Kelly converted a former Daewoo dealership and used-car lot on Route 114 into a Fiat showroom in three months. Fiat of Cape Cod, Fiat of Norwood, and Fiat of Worcester are still under construction. So far, only 17 Fiat dealerships are open nationwide, according to the automaker.

The Falcones said they rented a Fiat 500 in Italy two years ago, and loved it.

“Rhonda liked the car so much that she decided to drive in Italy for the first time,’’ Angelo Falcone said. “We put 3,000 kilometers [about 1,860 miles] on it driving all over the country.’’

For now, the 500 is available in three trim levels: Pop, Sport, and Lounge. All the first shipments were Sport models, with a five-speed manual transmission and tuned suspension.

The price of the Pop starts at about $16,000. The upscale Lounge comes with a six-speed automatic transmission, two-tone leather seats, and a fixed-glass moon roof for about $21,000.

“It overflows with Italian personality,’’ said John Paul, who tests dozens of new cars each year for AAA Southern New England. “Will it be a success? Typically, Americans really don’t like small cars.’’

Clifford Atiyeh of the Globe staff contributed to this report. Bill Griffith can be reached at wgriffith@globe.com.

In 1984, Fiat left the US market, where it had a reputation for poor reliability and a shoddy dealer network. A look at how the old and new models compare: