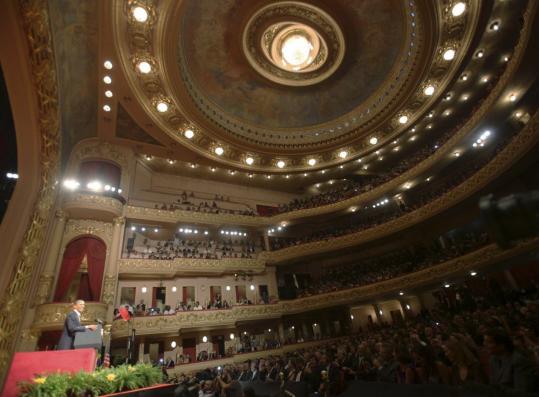 RIO DE JANEIRO — With a crisis in Libya competing for his time, President Obama stuck to the agenda of his state tour of Brazil, arriving yesterday morning in a once-notorious slum that Brazilian officials now hold up as a symbol of a rejuvenated country.

“Welcome Obama,’’ a group of children said after the president and his entourage arrived in City of God, made famous by a 2002 Brazilian film of the same name. Obama kicked a soccer ball with pint-size boys and swayed to the beat of a samba performance at a makeshift community center.

Michelle Obama and their daughters, Sasha and Malia, accompanied the president as he got a firsthand look at a neighborhood long battered by crime and poverty but that, like Brazil itself, is now on the rise. Indeed, Brazilian officials have been eager to show how a new police initiative and the country’s strong economic growth have improved life even for the disenfranchised.

It was the president’s first stop in a day in which the administration hoped to emphasize its commitment to building economic and diplomatic ties to Latin America’s biggest country. But never far from Obama’s mind was Libya, where US and European air strikes were launched against Libyan leader Moammar Khadafy’s forces Saturday. Obama was expected to huddle throughout the day to discuss the crisis.

The operations against Libya’s strongman encroached on what Secretary of State Hillary Rodham Clinton characterized as a vital trip for US diplomacy — a tour designed to improve sometimes strained relations with Brazil, the world’s seventh-largest economy and an important market for US products.

“Obviously, there is a lot going on around the world and much that demands our urgent attention,’’ Clinton said Friday. “But as I often say, we have to deal with both the urgent and the important at the same time.’’

On Saturday, Obama met in Brasilia, the capital, with Brazil’s new president, Dilma Rousseff. Both have expressed interest in improving relations, and the two leaders signed preliminary trade agreements.

Brazil is interested in stepping up exports to the United States, from agricultural products to manufactured goods.

US companies are interested in lucrative contracts that will be awarded ahead of the 2016 Olympics in Rio de Janeiro, as well as the investments that will become available as Brazil works to develop deep-sea oil reserves off Rio’s coast. The White House also said Obama talked up Boeing F-18 jet fighters to Rousseff, as Brazil weighs updating its air force fleet.

Still, there is disharmony on various issues. Rousseff gently chided the United States for its protectionist policies. And Obama did not endorse Brazil for a permanent seat on the UN Security Council, a major initiative of Brazilian diplomacy.

It also appears the United States will be unable to prod Brazil to share Washington’s efforts to isolate Iran, as that country moves forward with its nuclear program.

But there was more than trade on Obama’s agenda. In City of God, Obama traded his suit for khakis and a comfortable white shirt as he walked onto a street, waving to people who crowded windows and rooftops, waving and shouting his name.

In an event designed to highlight the kinship between Brazil and the United States, he gave a speech yesterday afternoon at Rio’s Theatro Municipal, a majestic theater on one of the city’s iconic public squares.

The welcome offered in Brazil has been warm. According to Latinobarometro, a Chilean polling firm that tracks opinions across Latin America, 80 percent of Brazilians have a favorable view of the US president. It was evident Saturday night and yesterday morning as throngs of people waited along the streets to get a glimpse of Obama.

Among those who hoped to see him was Waleska Santos Souza, 22. She said she was happy to see a black president in the White House and to have a woman lead Brazil, also a first.

“Symbolically, this is going to go down in history,’’ she said of the visit. “I think Americans feel much the same way right now.’’

Yesterday evening, the president and his family were to visit Rio’s most symbolic monument, the Christ the Redeemer statue on Corcovado mountain, its arms outstretched over this picturesque metropolis.

He will then travel to economically robust Chile, where today he will meet with President Sebastian Piñera. Obama will end his tour in El Salvador, which is whipsawed by drug violence.