They have just one word for you: plastics 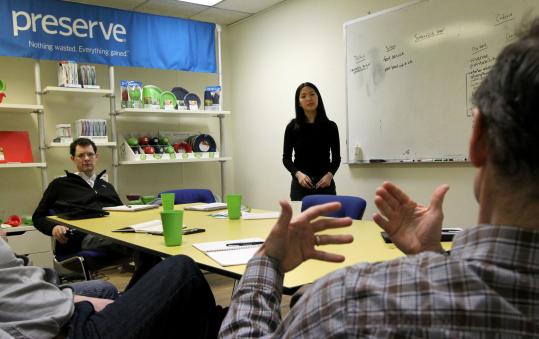 This is the story of a small plastic food container, retail price $2, designed and manufactured in Massachusetts.

At a moment when making cheap consumer goods in the United States seems to be a nostalgic memory, Eric Hudson and his 12-person team at Preserve are doing the improbable. From $15 cutting boards to $2 cereal bowls to $3 toothbrushes, every product in Preserve’s catalog is made in the United States. And everything is made of 100 percent recycled plastic, from sources like yogurt cups, clothes hangers, and water filters. Over the past few years, Preserve’s products have found a place on the shelves of major retailers such as Target and Whole Foods Market.

Another interesting wrinkle: Any item the company sells can be mailed back to Preserve when you’re done with it, and the plastic will be reused in new products. Preserve’s toothbrushes even come packaged with a postage-paid envelope.

But the company, which has mainly been funded by individual investors, struggles with a paltry marketing budget and too few employees focused on signing up new retailers. Though he acknowledges that not enough consumers are aware of home goods made from recycled plastics, Hudson’s vision for the 15-year-old company is ambitious: “I’d like to see Preserve become a global, eco-friendly company,’’ he says.

The Mini began its life as a freebie created for Stonyfield Farm. The New Hampshire yogurt maker wanted to encourage its customers to purchase quarts of yogurt, instead of single-serve containers. “They saw it as better for consumers economically, and it uses a little less packaging as well,’’ says Ben Anderson, Preserve’s chief operating officer.

Still, Stonyfield realized people wanted to carry yogurt to school or work in a convenient container. So starting last year, Stonyfield invited customers to mail in four yogurt container tops, and, in return, they’d receive a free Mini (along with coupons for other Preserve products).

Preserve collaborated on the Mini with Evo Design LLC, a Connecticut firm that has worked with well-known brands such as Crate & Barrel and Kodak. One key decision was to give the container a screw-on, see-through lid. As Preserve product development manager Christie Lee explains, “With a snap-on lid, you’d worry that it wasn’t totally sealed, or that if you dropped it, that the lid might come off. And the clear top makes it easy to see what’s inside, whether it’s yogurt, salad dressing, or crackers you might keep inside as a snack for your kid.’’

The container’s appearance, Lee says, is “nature-inspired,’’ shaped vaguely like an apple, with the bright green color evoking a Granny Smith. (Lee says more colors are on the way.)

For the Mini, Preserve collects plastic primarily from industrial sources. A company that makes plastic take-out containers, for instance, might send its rejects to Preserve. The plastic is ground into rice-sized bits that are fed into an injection molding machine.

G&F Industries Inc. of Sturbridge makes the Mini, along with other Preserve products, including colanders and reusable drinking cups. The two companies began working together in 2007. G&F president John J. Argitis says Preserve is still his only customer using 100 percent recycled plastic in its products. “From my perspective, I think it’s pretty rare in the industry,’’ he says.

While the relationship started small, today Preserve is a major customer of the 100-person plastic molding company. Once the Mini has been produced, G&F applies several labels (like “BPA Free’’ and a bar code), puts a dozen of them into a cardboard box, and sends the boxes off to a distribution center in upstate New York. (Preserve uses software to analyze the environmental impact of nearly every decision it makes, such as whether to use trucks or trains to transport materials and products. The finished Minis are trucked; plastic the company reuses travels by rail.)

Preserve didn’t have to spend its own money developing the Mini; Stonyfield took care of it. “As a small company,’’ says Anderson, the chief operating officer, “we wouldn’t have been able to finance it ourselves. They funded the design, and bought 80,000 of them.’’

But starting last May, Preserve also began making Minis to sell online and through retail partners. One store that carries the Mini, along with other Preserve products, is Greenward, which sells “eco-friendly goods’’ in Cambridge. “We carry pretty much everything they make,’’ says co-owner Scott Walker. “They’re reasonably priced, they come in bright colors, and they’re all clever designs.’’ Walker says once a customer buys the Mini or another food storage container at his store, “they tend to come back and get more.’’

Even at $2 a pop, the Mini is profitable for Preserve, says Anderson. Revenue rose 5 percent last year, and the company ended 2010 with a profit, after losing money in 2008 and 2009.

Much of Preserve’s limited marketing budget is spent on paying retailers for favorable placement in stores. At Donelan’s Supermarket, a small, local grocery chain, for instance, Preserve paid the store to display its products at the end of one of its aisles a spot that affords extra visibility.

Despite the company’s not-quite-overnight success and copious magazine and television coverage it has received, Hudson, the founder, says Preserve may still need money from a strategic investor to grow into a national brand. That investor would likely be another consumer products company that has relationships with major mainstream retailers. (Eco-conscious retailers and natural food stores have long been gung-ho about Preserve’s products.)

“We need to bring on more people to replicate the distribution success we’ve been having,’’ Hudson says. “But the thing we’ve been able to achieve is to create this strong emotional connection with our customers, and get them to understand the story behind the products. That’s something you can’t just go buy, and you can’t create it really quickly.’’