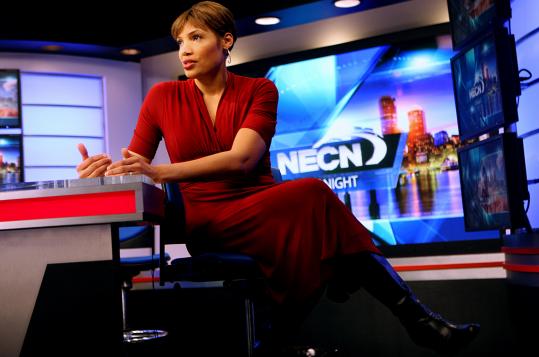 When Latoyia Edwards was growing up in Dorchester, she made sure to watch Liz Walker anchor the nightly TV news.

“She looked like me,’’ Edwards recalled. “She was outgoing, and an African-American face on television.’’

It was the 1980s, and Walker, working at WBZ-TV (Channel 4), was the first black anchor of a Boston TV newscast — and one of the few in the country. Now Edwards is the only African-American on an evening news anchor team in Boston, the nation’s seventh-largest TV market. She said Walker is “one of the people who made me think that this is something that I can do. She totally inspired me to go into TV journalism.’’

Edwards was promoted to the marquee anchor position at cable channel NECN in January. She believes there are not enough members of minority groups on Boston’s TV news teams.

“I just wish there was more of a balance,’’ she said. “It opens everybody’s world to have different groups of people doing the news.’’

Since cable giant Comcast Corp. took full ownership of NECN less then two years ago, the station has revamped its news programs with flashier graphics, a faster-paced presentation, a retooled morning show, and some new faces.

The idea is to attract more viewers, especially in the advertiser-friendly 25-54 demographic. At 34, Edwards is the youngest anchor on a flagship anchor team in Boston. She replaced Beth Shelburne, who left the station last August.

Edwards rose through the ranks at NECN, starting as an early-morning reporter in 2005, then serving as a health reporter and a weekend anchor.

“She’s a serious news person who also has an engaging personality,’’ said Kathleen McCormack, a longtime NECN viewer in Brookline. “I’m happy to see her elevated.’’

NECN officials said Edwards is gracious and authoritative on the news desk.

Kathy Y. Times, president of the National Association of Black Journalists and a TV reporter in Mississippi, applauded Edwards’s promotion.

“There is work to be done there,’’ Times said. “It’s so important to have African-Americans as lead anchors.’’ She said that when young people of color see other African-Americans on the air, they might be inspired to pursue journalism.

“It really helps to have people like Latoyia and organizations such as NABJ nurturing those youngsters and saying you can be anything you want when you grow up,’’ Times said.

Walker, who helmed WBZ newscasts for 25 years, would like to see even more diversity among the city’s anchors.

“In some ways, I don’t think Boston has changed since the days when I was on the air, and I think that is sad,’’ said Walker, who now hosts “Better Living,’’ a regular lifestyle program on WCVB-TV (Channel 5). “There is no pressure, there is no incentive to try and make your television station reflect the world.’’

According to the Nielsen ratings service, 82 percent of Greater Boston’s viewing audience lives in Massachusetts; 18 percent in New Hampshire; and less than 1 percent in Vermont. Nielsen defines the market as 5.7 percent Hispanic, 5.4 percent black, and 4.6 percent Asian.

Station managers said their on-air teams are reflective of Greater Boston’s TV audience. Lead anchor slots rarely open up, they said, and ethnic mix is only one consideration when putting a team together. Other factors include credibility, longevity, and chemistry with coanchors.

Edwards said she hopes she can serve as a role model in the Walker mold.

When she was young, Edwards was a regular competitor in local youth oratorical contests. She decided to pursue a career in journalism and went on to Emerson College, where she majored in broadcast journalism.

She started her career as a news writer at radio station WBZ-AM 1030, then worked as a reporter for the Fox TV affiliate in Binghamton, N.Y. In 2002, she was crowned Miss Massachusetts for the Miss USA pageant, which she believes helped jump-start her broadcast career. She caught the attention of a news director at the NBC affiliate in Springfield, where she worked as an anchor for three years before joining NECN in 2005.

When she is not on the anchor desk, Edwards is out in the community, attending some 25 events a year. Whether moderating events like last year’s Roxbury Film Festival or serving as an emcee at a recent function at a YWCA in Worcester, she hopes to encourage young people of color to pursue careers in broadcasting.

“They don’t think in terms of this being an accessible career,’’ Edwards said. “When I walk into a room, and little kids look at you, and they say, ‘Wow, you’re on television,’ they identify with you. I wear braids like they do. That means something.’’

Female meteorologists take over at Boston TV stations.
Your comment is subject to the rules of our Posting Policy
This comment may appear on your public profile. Public Profile FAQ