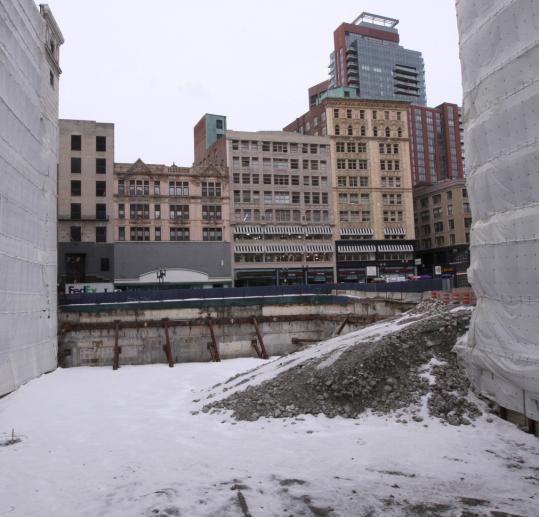 Vornado and its partners were said late last year to have received several offers for the site, all below the roughly $100 million they spent to acquire the property in 2006. (Bill Greene/ Globe Staff)
By Casey Ross Globe Staff / March 3, 2011

The owners of the former Filene’s property in downtown Boston are now trying to sell the idle project largely as a housing development after receiving low bids for it as a mixed-used complex, according to several people involved in the sales process.

Under pressure from City Hall to sell the site because it cannot get its own plan underway, principal owner Vornado Realty Trust had previously marketed the property as an office, retail, housing, and hotel complex. But the bids it received varied widely, and all would have required Vornado to sell at a loss.

Now it is hoping to draw higher bids from prominent residential developers who have expressed interest in the site, where many see an opportunity to tap increased demand in Boston for upscale rental housing.

“The appetite for residential development has improved threefold since we started the process,’’ said Robert Griffin, an executive with the real estate firm Cushman & Wakefield, which is marketing the property. “The process is ongoing and we have a high level of interest.’’

But Boston Mayor Thomas M. Menino remains frustrated with Vornado, whose failure to sell the property or resume building on it has saddled Downtown Crossing with a giant construction cra ter for almost three years. The city is trying to spark redevelopment in that area and has recently received proposals for other projects nearby, including a residential building across from the Ritz Carlton Hotel and Towers farther down Washington Street. The progress of that project and other efforts is only increasing city officials’ impatience with Vornado.

“It’s not the city’s fault that Vornado overpaid for the site,’’ said Susan Elsbree, a spokeswoman for the Boston Redevelopment Authority. “The residents of Boston shouldn’t have to accept blight, while Vornado does nothing, and only cares about protecting its bottom line.’’

Vornado declined to respond to the city’s complaints. The company has had a rocky relationship with the Menino administration since it halted construction on a 39-story tower on the site in June 2008, when the global credit crisis shut down lending for large real estate projects.

The New York firm began trying to sell the Filene’s site last fall, after the BRA revoked the project’s building permits because of the construction delays. Vornado is the lead partner in a group of owners that includes JPMorgan Chase & Co. and Mack-Cali Realty Corp. John B. Hynes III, a Boston developer working with JPMorgan and Mack-Cali on the project, declined to comment yesterday.

People involved in the bidding said Vornado and its partners late last year received several offers for the site, all below the roughly $100 million the team spent to acquire the property in 2006.

Some bidders offered as little as $40 million, these people said, while others offered tens of millions of dollars more.

Griffin, the project’s broker, would not disclose the bid amounts, or say how much Vornado and its partners are seeking.

The sale process is complex because each bidder had a different plan for the site’s redevelopment: Some proposed buying the entire development, for example, while others wanted only particular components, such as the residential and retail pieces.

Vornado is now trying to simplify the process by marketing the property as a residential development site, with some opportunity for retail on the lower floors.

A who’s who of developers in Boston and nationwide have expressed interest in the property. It’s seen as an ideal location for rental housing, which remains in demand.

But it is unclear how many would pursue it through this next sales phase.

Representatives for Normandy and Boston Residential declined to comment yesterday. The other potential bidders did not return calls for comment.

The history of Filene's Basement