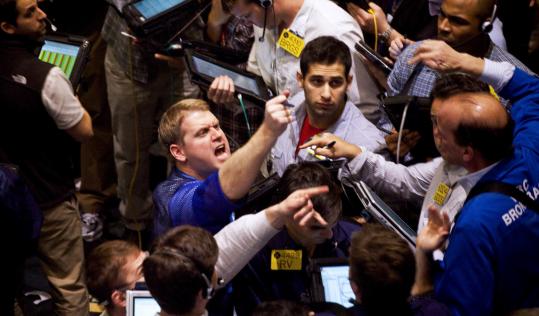 Traders were busy in the crude oil pit at the New York Mercantile Exchange yesterday as oil settled at just under $100 a barrel. (Michael Nagle/Bloomberg)
By Chris Kahn Associated Press / February 25, 2011

NEW YORK — Oil prices dropped yesterday for the first time in nine days after the International Energy Agency said the rebellion in Libya may have cut oil production less than originally feared.

The International Energy Agency said that the violent uprising in Libya has forced oil companies to idle between 500,000 and 750,000 barrels per day of production, or less than 1 percent of global daily oil consumption. That’s roughly half of what Italy’s Eni, Libya’s largest oil producer, estimated earlier yesterday.

IEA also said it can make up for any lost shipments from Libya by tapping into large surpluses held by member countries, which include the United States, the United Kingdom, France, and Germany. Altogether, member nations hold 1.6 billion barrels of emergency oil supplies, or enough crude to supply the group for 145 days.

Saudi Arabia, the most important member of the Organization of Petroleum Exporting Countries, said that it would increase production if necessary.

Three House Democrats, including Edward Markey of Massachusetts, sent a letter to Obama, urging him to use the Strategic Petroleum Reserve to combat a surge in crude prices. The US reserve holds 727 million barrels and is full, they said.

At the pump, gasoline prices rose more than 2 cents yesterday to a new national average of $3.228 per gallon.

Material from Bloomberg News was used in this report.