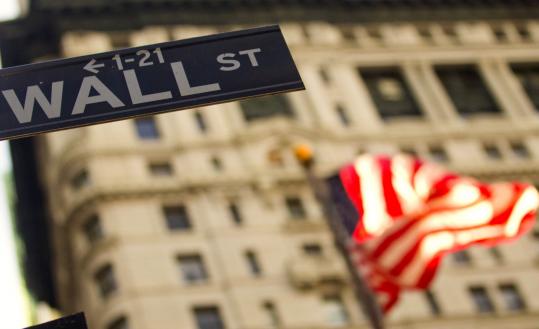 Bonuses may be down, but that’s not the whole picture: Securities industry wages paid in New York in the first half of 2010 were 22 percent higher than in the previous year, reflecting lagged cash bonuses, higher base salaries, and deferred compensation. (Jin Lee/Bloomberg)
By Michael Virtanen Associated Press / February 24, 2011

The number reflects an industry shift toward deferred compensation and higher base salaries, DiNapoli said. “Cash bonuses are down, but that’s not an indication of weakness on Wall Street,’’ he said.

The estimate of bonuses is down 8 percent from $22.5 billion actually paid in 2009. But it is $500 million more than DiNapoli’s bonus estimate a year ago. Bonuses extended into March and April last year, beyond the traditional season.

“We’re not expecting it to creep up as much as the previous year,’’ comptroller’s spokesman Eric Sumberg said.

The estimate was about one-third less than the 2007 bonuses before the financial crisis. In 2008, Wall Street firms gave out $17.4 billion in bonuses though that year was one of its worst.

“This is not going to save us from budget shortfalls, but it’s not going to make a bad situation worse,’’ DiNapoli said. The state government is facing a projected $10 billion budget deficit in the coming fiscal year, while tax collections from Wall Street have declined from about 20 percent of the state’s total revenues to about 13 percent.