Drop old jobs from resume to avoid dating yourself 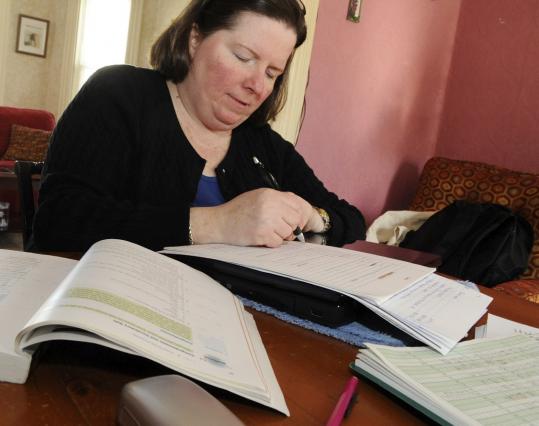 Maureen Wark, of Salem, has been teaching part time at a community college and doing consulting work while looking for a full-time job in higher education. (Lisa Poole for The Boston Globe)
By Cindy Atoji Keene Globe Correspondent / February 20, 2011

As a longtime college housing director, Maureen Wark said, “How do you move 1,300 students in two days into three dorms? It’s not easy, but I got really good at it, and loved the job.’’ But in July 2008, after 12 years working at a large Boston-area university, Wark’s supervisor called her in to her office and told her it was time to move on for her own professional growth.

Wark, who agreed she would leave in June 2009, would have nearly a year to look for a new job. But the timing couldn’t have been worse as the economy plunged into a deep recession.

More than 100 applications later, Wark is still looking for a full-time position while teaching part time at a community college and doing consulting work in higher education administration.

When Wark, 48, of Salem, met with Boston career coach Elizabeth Freedman, she wanted advice on her job search and resume. Although she had a career of more than 20 years in higher education, she felt she was losing touch with the industry.

“When I’m sitting in my pajamas on a Tuesday, it’s hard to reach out and feel like I’m still part of that world,’’ she said.

Freedman’s first piece of advice: create a plan for managing contacts. Freedman suggested taking an e-mail management tool such as Microsoft Outlook, creating an address book of possible job leads, and importing the names into an Excel spreadsheet. Then, she said, Wark should use the spreadsheet to track how and when she followed up with a contact to make sure she followed up every six weeks.

Next, Freedman recommended editing down a three-page resume by removing college graduation dates and deleting jobs she held more than 15 years ago.

“By putting absolutely everything on your resume, you’re running the risk of appearing overqualified,’’ she said. “I think you’re aging yourself on paper.’’

Wark also needed to make smart social-networking moves, Freedman said. Twitter is evolving as a resource for both job searching and recruiting. One recent Student Affairs Collaborative chat on Twitter entailed a one-hour conversation that produced 590 comments from 67 student affairs professionals. “These are discussions that you should be a part of,’’ said Freedman.

When interviews are few and far between, many job seekers find it’s difficult to improve interviewing skills. Freedman urged Wark to remember that she is an active participant in the interviewing process. Take charge and shape the interview by asking appropriate questions while explaining accomplishments and how they relate to the job.

“You are not at the mercy of the interviewer,’’ said Freedman.

Her final words of advice to Wark: get feedback on her reputation in the field. “Ask close colleagues, ‘Why do you honestly think I’ve been in the job market for X period of time?’ ’’ Freedman said. “You want people not just to think of you as ‘our resident-life gal,’ but a senior level higher ed administrator.’’

MAUREEN WARK
Goal: Land a job in higher education, preferably residence life or college housing.
Problem: Lots of contacts in the field are yielding few job opportunities.
Recommendations from career adviser Elizabeth Freedman:
■ Create a simple, repeatable system for reaching out to networking contacts.
■ Be selective about details included on resume, taking out dated or superfluous information.
■ Join Twitter sessions related to the industry.
■ Be an active participant in interviewing process by asking knowledgeable questions and selling skills.
■ Ask for feedback from colleagues about reputation in the workplace, which can help fix any negative perceptions.