Construction set to begin next year 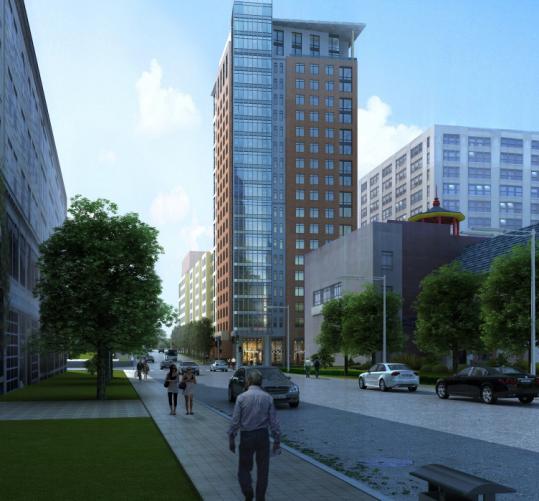 A 20-story tower at Hudson and Kneeland streets will include 295 apartments and 50 condominiums. (Add Inc. Rendering)
By Casey Ross Globe Staff / February 18, 2011

After a two-year delay, a development team is moving forward with a towering housing and retail complex on a vacant parcel in Chinatown, adding to the slew of residential properties about to undergo construction in Boston.

A prior version called for 325 residences, most of them ownership.

The $130 million project will be built at Hudson and Kneeland streets, at the fringe of Chinatown and downtown Boston, in an area now marred by concrete highway ramps. One of the two buildings in the complex is a striking 20-story apartment tower that would be easily seen from Interstate 93 as it approaches the city.

“It will be an iconic building that signals you’re entering Boston,’’ said Kirk Sykes, who runs a New Boston real estate investment fund. “We want to create vibrancy and activity where there’s just dirt at the moment.’’

The complex also includes a six-story residential building, a community center, and a 13,000-square-foot park.

Construction of the project is scheduled to start in the first half of 2012. Other residential developments also slated to get underway soon include a 200-unit complex at the Dainty Dot building on Kingston and Essex streets, 395 units at the former Gaiety Theatre on Washington St., and 265 units on the site of a parking lot across from the Ritz-Carlton Hotel and Towers.

The Hudson Street developers said their project is distinct from the others because more than 40 percent of its units are priced as affordable, including 95 rental apartments and all 50 of the condos. The average price of a two-bedroom condo will be about $175,000, while a two-bedroom apartment will rent for $540 to $1,170 a month to qualified tenants. Project executives said they will seek city and state housing subsidies to help finance the work.

“We want Chinatown to stay diverse,’’ said Janelle Chan, executive director of the Asian Community Development Corporation. “The last several years a lot of luxury housing has come into the neighborhood, and we want it to remain welcoming and accessible to low-income and working-class families.’’

The project will restore housing and storefronts to a section of the city that was razed in the 1960s for a ramp to the old elevated expressway. The ramp was subsequently relocated during the Big Dig, allowing the land on Hudson Street to revert back to housing use.

A group of 15 Chinatown community organizations advocated for years for the redevelopment of the property, prompting the Massachusetts Turnpike Authority in 2006 to select New Boston Fund and the Asian Community Development Corporation to spearhead the project.

“This mixed-income development will provide much needed housing while restoring a neighborhood which existed on Hudson Street more than 45 years ago,’’ Mayor Thomas M. Menino said in a statement.

Correction: Because of a reporting error, an earlier version of this story incorrectly reported rents for the planned housing complex on Hudson Street. Two-bedroom units designated as affordable will be available to qualified tenants for $540 to $1,170 a month.

Four buildings have been scrapped. See what could have been.
Your comment is subject to the rules of our Posting Policy
This comment may appear on your public profile. Public Profile FAQ