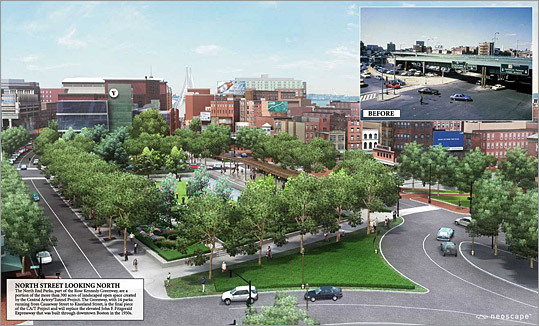 (The Massacusetts Turnpike Authority) Plans for a $70 million YMCA community center on the Rose Fitzgerald Kennedy Greenway have been scrapped.
By Casey Ross Globe Staff / February 17, 2011

The state’s drawn-out effort to bring cultural and community institutions to the Rose Fitzgerald Kennedy Greenway can now be declared dead, with the YMCA of Greater Boston becoming the last of four selected builders to cancel plans for a facility on the downtown park system.

The Y’s board of directors voted last Thursday to abandon a proposed $70 million community center on the Greenway near the North End, citing the expense of building over the underground highway.

That decision concludes a slow unraveling of the plan to add cultural institutions to draw crowds to the Greenway and to cover the unsightly ramps along the 13-acre strip of parks. Other groups previously dropped plans for a so-called Garden Under Glass, a center for arts and culture, and a museum focused on Boston history.

City and state leaders yesterday said the YMCA’s decision provides the finality needed to move beyond an original vision that many acknowledged was not working. Some officials said they have come to appreciate the Greenway as an open space without buildings, adding that it might need only minor changes to make it more popular and active.

“The notion that this could be one continuous space, and not subdivided by buildings, is a powerful realization,’’ said Kairos Shen, the city of Boston’s chief planner. “The question now is, how do we make sure there are enough activities on or around the Greenway to bring more people down there?’’

The nonprofit conservancy that manages the Greenway said it has numerous efforts under way, including doubling the number of food vendors in the parks to 12 and hosting a large outdoor art exhibition. The conservancy is also trying to raise money for a tree nursery on a parcel near Faneuil Hall that is broken up by ramp openings.

“We know much better than we did 10 years ago how this civic space works,’’ said Nancy Brennan, the conservancy’s executive director. “This gives us a fresh opportunity to ask what is the right combination of public art, programming, and structures to make the Greenway the place everyone envisioned.’’

Public officials acknowledged that further additions must also include significant benefits for residents of surrounding neighborhoods who were promised a YMCA and the other institutions as payback for enduring 16 years of Big Dig construction.

The original estimates for each of the four buildings did not account for how much more expensive it would be to build decks over ramp openings. Transportation officials yesterday also said the state did not set aside nearly enough money to help the nonprofits with those construction costs.

For example, the $31 million appropriated for that work was enough only to cover the cost of the YMCA’s parcel, said Peter O’Connor, head of real estate for the Massachusetts Department of Transportation.

“People don’t like to hear me say this, but it’s really hard to build over eight lanes of live traffic,’’ O’Connor said. “We need to stop acting like we can produce fancy architectural drawings and then just put up buildings. We have to look at other ways of solving this.’’

O’Connor said the state will solicit public views on the next steps for the Greenway.

The first of the institutions to abandon its Greenway plans was the Massachusetts Horticultural Society, which gave up on its Garden Under Glass in 2008. A year later the Boston Museum dropped its planned facility opposite Faneuil Hall. Then last year, the New Center for Arts and Culture ended efforts for a new structure near Rowe’s Wharf.

As for the YMCA, spokeswoman Kelley Rice said the institution spent five years trying to make the Greenway location work but was unable to come up with the money.

“We looked at every conceivable option,’’ Rice said. “There were very significant engineering and construction costs that proved too great a financial burden.’’

“It’s very disappointing,’’ said State Representative Aaron Michlewitz. “A lot of carrots were held out before the neighborhood during 16 years of construction, so I would like to see continued commitment to opening a community center.’’

Michlewitz and Boston City Councilor Salvatore LaMattina said they would look for another site for a downtown YMCA.

State officials are currently soliciting public suggestions for a vacant parcel just off the Greenway near the Haymarket transit station, but it is unclear whether a community center would work there.

Rice said the YMCA is not currently considering other downtown sites.

The former Massachusetts official who conceived the original Big Dig construction project suggested that mistakes during construction of the submerged highway may be to blame for the prohibitive costs of building over it. Frederick Salvucci, former transportation secretary under Governor Michael Dukakis, said the construction was designed specifically to ensure that building over the highway ramps was financially feasible.

“This should not have happened,’’ Salvucci said. “But the question now is what you do about it. As long as nothing is built over the ramp parcels, those parts of the Greenway are not going to look like parks to anyone.’’