Ex-Lesley leader makes most of job 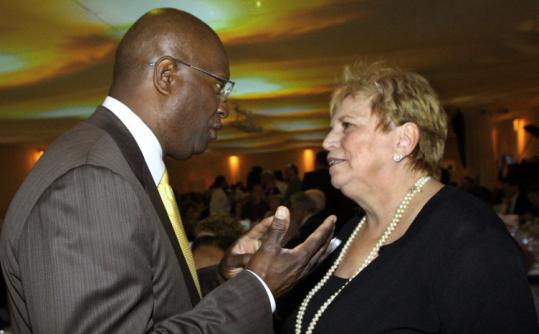 Margaret A. McKenna devoted her career to education and social justice, and building programs to train teachers. When she retired after 22 years as president of Lesley University in Cambridge, running a charity seemed a logical next act.

McKenna leads the Walmart Foundation, a perch that gives her one of the biggest jobs in US philanthropy, running the charitable efforts of Wal-Mart Stores Inc. Having started out as a civil rights lawyer enforcing labor laws, McKenna said she had to think long and hard about taking a job with the retail giant, which built an empire on low-price merchandise, but also a reputation for mistreating workers and steamrolling small businesses.

To the people in her circles, the move was puzzling. Longtime friends initially described it as “surprising’’ and “crazy.’’ Even her two grown sons were stunned.

“If I did not believe the company had the commitment to treat people fairly now, and to give back to the community, I wouldn’t be there,’’ McKenna said in her first in-depth interview on her foundation role. “It couldn’t just be me, trying to make the bad guy look good. That just would not work for me.’’

Three years after trading Lesley’s grand president’s home for a Back Bay condo and a sterile Prudential tower office, McKenna directs a half-billion dollars a year in giving, focusing on hunger and education. While she tackles issues close to her heart, she has also become an ambassador for the world’s most powerful retail machine, helping to burnish its image and lay the groundwork for its push into urban markets — including Boston.

McKenna is everywhere, presenting checks at store openings and meeting with politicians and community leaders around the country. Over the course of a few weeks last summer, she met with the superintendent of schools in Los Angeles and the head of the LA food bank. She spent time in Detroit, where Wal-Mart has no stores, meeting with nonprofit officials. And she helped design a $20 million philanthropy package for Chicago that’s part of the company’s expansion there.

In Washington, she met with Michelle Obama, in a discussion that would help lead to Obama’s healthy food initiative revealed last month with Wal-Mart. Before taking all that on, McKenna, now 65, had to do more than a little soul searching. When company officials at the Arkansas headquarters invited her to meet, McKenna was skeptical. She read every anti-Wal-Mart book and saw the critical 2005 documentary on the company.

Wal-Mart had come under criticism for paying low wages, so low that it steered workers to Medicaid, rather than paying for their health insurance, and hiring illegal immigrants to clean stores. And there was a multibillion dollar discrimination suit — which Wal-Mart is appealing before the US Supreme Court — brought by thousands of women the company underpaid and failed to promote.

Ultimately, McKenna was convinced that Wal-Mart had changed its practices. And this was a chance to have a huge impact, she said. Wal-Mart has since pledged to spend $2 billion through 2015 on hunger relief.

Together, Wal-Mart and its foundation give away more money than any other US company: $288 million in 2009, according to the Chronicle of Philanthropy. AT&T ranked second, at $240 million, followed by Bank of America. Under McKenna, Wal-Mart has also become the nation’s largest food donor, with stores giving away $192 million in food in 2009. Counting foreign and food donations, total giving reached $512 million — up 58 percent since McKenna’s arrival in 2007.

In Massachusetts, the company donated $7 million to nonprofits in 2009, including many in Boston, even though it has no stores in the city. Wal-Mart is looking to move into Boston, and executives have met with city councilors in recent months. McKenna has announced gifts from $100,000 for the Greater Boston Food Bank to $2.6 million for YouthBuild, a Somerville group for disadvantaged youth. And she just rolled out a $2.5 million grant to Goodwill Industries for job training for single mothers.

“They’re throwing a lot of money around,’’ Davis said. “They have a desire to buy goodwill, and for actual business and political decisions to happen as a result.’’

The company, when it hired McKenna, said it wanted to tap her experience “managing programs that have a positive impact on communities’’ to take the foundation to the next level. Her profile in the Boston area is growing. Last week, she was selected to chair the search committee for a new chief executive at Beth Israel Deaconess Medical Center following Paul Levy’s departure.

McKenna said she doubted Wal-Mart hired her to improve its image in the Northeast. Before her, the foundation was run by a longtime Wal-Mart corporate affairs executive, and mainly gave numerous small donations in towns where it had stores. The job was broadened for McKenna, to develop strategy and oversee all corporate giving, as well as the foundation and in-kind donations.

Her focus on fighting hunger meshes with the interests of Wal-Mart, which is trying to build smaller stores, with supermarkets, in city neighborhoods. For McKenna, it’s about poor children having enough to eat, so they can learn in school, and introducing healthy, affordable food and produce in so-called food deserts — areas that lack grocery stores.

“I have to say it is confusing to me for people in a Detroit or a Chicago to say ‘We don’t want a Wal-Mart,’ when there is nothing there,’’ she said.

As Wal-Mart officials fought last year to expand in Chicago, negotiating workers’ wages and setting up Web pages to garner community support, McKenna worked behind the scenes on the giving strategy. “The real question I had for Chicago was, besides hunger, what could we do in education? Middle school literacy? School breakfast?’’ she said.

Last June, Wal-Mart announced it would build several dozen stores in the city over five years, generating 12,000 jobs and $500 million in taxes. As part of the package, Wal-Mart would develop charitable partnerships worth $20 million to “eradicate hunger, curb youth violence, and help all Chicago residents live better.’’

“Dropping $20 million on a depressed community through charity is a nice thing to do, even if it’s really just greasing the wheels to get approval for opening a store,’’ he said. But, “it wouldn’t be strategic in our view unless it has a lasting social impact.’’

McKenna, raised in Central Falls, R.I., by parents who were public school teachers, has a history of ambitious undertakings. She worked on high-profile race discrimination cases for the US Department of Justice in the 1970s and was later deputy counsel to President Carter.

As president of Lesley, she was known for her ability to captivate a room by speaking directly, and win consensus among board members and faculty for sometimes controversial efforts. She led the expansion of Lesley to 12,000 students from 2,000, oversaw its transition to a coed university from a women’s college, and pressed for the 1994 purchase of the old Sears building in Porter Square, which many felt was risky at the time.

“She not only had vision, but she knew how to execute,’’ said John O. Parker, a former chairman of Lesley’s board.

Parker was among McKenna’s friends and colleagues who wondered if Wal-Mart would be a good fit. Frankly, said Carol Streit, chief of student enrollment during McKenna’s tenure, “I thought she was crazy.’’

McKenna broke every rule she meant to follow when she took the Wal-Mart job. “My intention was not to run something big, supervise people, or travel,’’ she said. Now she oversees a staff of 32 and flies routinely. One Saturday a month, she makes the eight-hour, two-flight trip to headquarters in Bentonville, Ark., for a managers’ meeting in a concrete bunker.

In the end, Streit said, even McKenna’s most skeptical friends saw that she could not turn down this job.

“Her work on hunger — I can’t think of another initiative in this country that’s this big,’’ Streit said. “She has the guts to make an enormous difference in the lives of people. She had no choice.’’