Pangs of dissent as Maine reaches for the whoopie pie 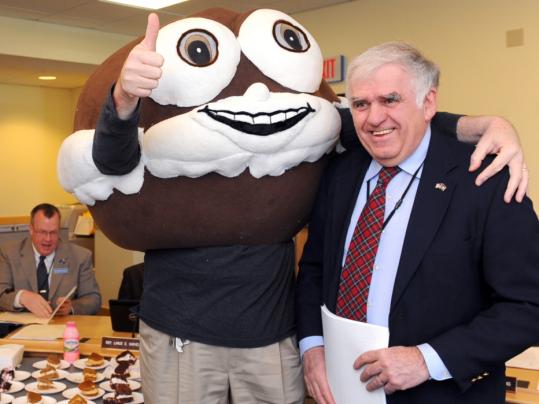 PORTLAND, Maine — In Europe, countries are consumed by debt. In Washington, the health care debate rages on. And in Maine, the whoopie pie is under attack.

Efforts to anoint the traditional Maine sweet as the official state dessert have divided Down Easters and raised ire among the nutrition-conscious, who say that the state is beset with obesity as it is without venerating two mounds of chocolate cake bound by a sugary, creamy filling. And now another renowned Maine treat — the blueberry pie — has been dragged into the fray.

The kitchen kerfuffle comes as a surprise to whoopie pie makers, who handed out dozens of the cakey treats to lawmakers at a legislative hearing on the matter this week and testified to the virtue of the confection as a local economic engine and beloved part of Maine’s heritage for decades.

But the whoopie pie’s swift ascension to the official Maine dessert hit a snag when state Representative Donald Pilon withheld support and derided the confection as a “frosting delivery vehicle.’’

“At a time when 31.3 percent of Maine’s children are considered overweight or obese, do we want to glorify a dessert that lists lard as its primary ingredient?’’ Pilon asked his fellow lawmakers at the hearing on Monday.

Instead, Pilon suggested what he sees as a healthier alternative: wild blueberry pie.

Fourth graders from a Maine elementary school are also challenging whoopie pies on several grounds. In a letter to the legislative committee, they maintained that the whoopie is a snack, not a dessert. They also recommended using Maine’s native blueberries (a $250 million industry) in an official state dessert because they are more nutritious.

Suddenly, the Wild Blueberry Commission of Maine finds itself in a food fight. David Bell, executive director of the blueberry commission, has tried to strike a compromise: appoint blueberry pie the official state pie.

“We’re very happy to be the state berry, a designation we’ve had for 20 years. We’re not asking to be the state dessert. We weren’t interested in creating a food fight,’’ Bell said. “But if lawmakers want to recognize us, we’d gladly accept the honor of wild blueberry pie being the state pie.’’

Amos Orcutt, president of the Maine Whoopie Pie Association, which represents about 60 local whoopie pie makers who sell the confections in gas stations, supermarkets, bakeries, and farm stands, noted that the crust of a wild blueberry pie is not exactly nutritious. He also pointed out that whoopie pies come in blueberry flavor for those who want their antioxidants.

Nonetheless, Orcutt feels it is urgent to move ahead on the whoopie pie bill in order to fend off a possible bid by Pennsylvania to take ownership of the whoopie pie. (There are some who say the Amish created the confection.) The designation as official dessert has a certain cachet, the association says, and offers unique marketing opportunities to draw more tourists to Maine.

“I want to make sure we claim our rightful heritage,’’ said Orcutt, who traces the state’s whoopie pies to Labadie’s Bakery in Lewiston, a third-generation bakery that has been making them since 1925. “Pennsylvania feels threatened.’’

Indeed, the editorial board of the Patriot-News in Central Pennsylvania recently urged the state’s new governor, Tom Corbett, to take up the issue as one of his first causes.

“Few foods are considered more Pennsylvania-centric than whoopie pies and yet Maine is moving forward with plans to make our cakey, sugary treat the official state dessert,’’ the Patriot-News said. “This makes no sense since [Maine] already has the market cornered on lobster pie and blueberry pie.’’

Maine whoopie pie aficionados are standing their ground. Not only do they lay claim to invention of the treat; some bakers, like Carol Ford of Cranberry Island Kitchen, are even taking credit for increasing the popularity of the gourmet whoopie nationwide. Ford and her business partner Karen Haase say they have raised the whoopie’s profile with their clam- and mussel-shaped pies, made with Maine butter and pure Maine spring water.

Without an immediate resolution in sight, Maine lawmakers agreed to resume debate Wednesday at the state capital in Augusta, and a vote may take place. Pilon, the vocal dissenter, said friends around the country, including constituents in Maine, have applauded his opposition to the whoopie. He plans to spend the days before the hearing researching another technicality which may disqualify the whoopie — how the concoction is taxed.

“If they are taxing it as a snack, then it’s not even a dessert,’’ Pilon said. “Then the whole issue is moot and the blueberry pie wins.’’