Long-stalled residences back in play 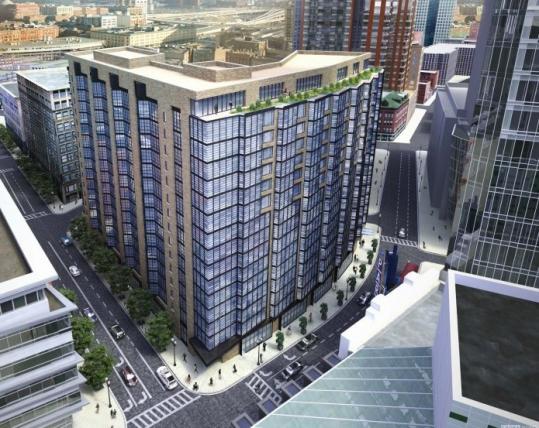 DOWNTOWN RESIDENCES — Millennium Partners is seeking to build a 15-story residential building (depicted above) across from the Ritz-Carlton Hotel and Towers. B9 (Millennium Partners)
By Casey Ross Globe Staff / February 4, 2011

The developer of Hayward Place in downtown Boston yesterday said he intends to begin construction of a residential building on the property this summer after a delay of more than four years.

Anthony Pangaro, principal of Millennium Partners-Boston, submitted a revised application to the city for a 15-story building with 265 units of rental and ownership housing, and 12,000 square feet to ground-floor retail space. An earlier plan for the property, now a parking lot across from the Ritz-Carlton Hotel and Towers, called for 188 residential units.

The project, initially approved in October 2006, has been on hold during an economic downturn that dried up funding for many of the city’s largest development projects. Pangaro said in a statement yesterday that he wants to begin construction this year “in spite of the still somewhat unclear economic climate.’’

“We are grateful for the opportunity to complete our work here and believe that it will become a key additional part of the city’s forward looking effort for downtown,’’ he said.

The BRA still must approved the revisions to the project, but Mayor Thomas M. Menino yesterday offered strong support: “This project represents a dramatic $200 million private investment that will be a tremendous boost for Downtown Crossing and the Theatre District,’’ Menino said in a statement.

The project is being designed by Handel Architects of New York, which also designed Millennium’s One Charles condominiums in the Back Bay and the recent addition to the Boston Conservatory of Music on Hemenway Street in the Fenway.