THIS STORY HAS BEEN FORMATTED FOR EASY PRINTING
DEVENS 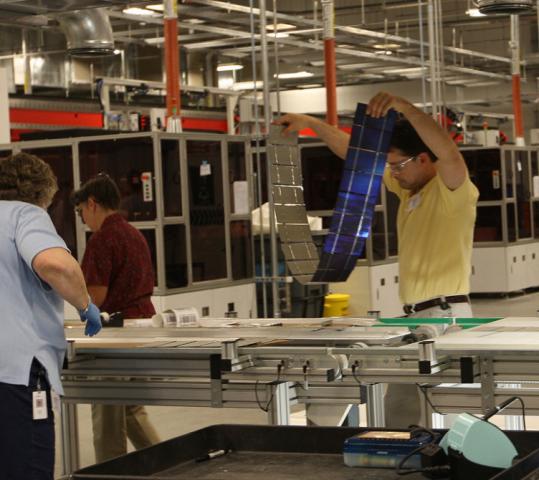 Evergreen Solar Inc.’s decision to shut its Devens factory both delivers a blow to the former Army base, and shakes the area’s still fragile labor market, according to local officials.

The company’s announcement last week represents a major setback in the drive to redevelop Devens into a mix of offices and homes, officials said. It follows on the heels of the Gillette Co.’s move in 2008 to close its Devens complex.

“It was only a few years ago when we cut the ribbon with the governor,’’ Ayer Selectman Jim Fay said of the Evergreen plant. “Now you get this monster of a building that is empty. What do you do with it? As for the 800 jobs lost, it is very sad and very disappointing.’’

The Marlborough-based solar-panel manufacturer drew many of its 800 workers from a broad area across the middle of the state, said Evergreen spokesman Michael McCarthy.

“I haven’t been told what is going to happen to me,’’ said Andrew Koenigsberg, an information technology worker at Evergreen’s plant who commutes from Westborough. “My assumption is I am probably not going to have a job long after the factory closes. I am looking for work.’’

Since opening the Devens plant in 2008, Evergreen rose to become the largest private employer on the Devens property, which extends into Ayer, Harvard, Lancaster and Shirley, and one of the largest in the area, according to numbers released by the Massachusetts Development Finance Agency, a state authority that oversees Devens.

State Senator Jamie Eldridge, a Democrat from Acton, is pushing to have a transition center set up at the plant to help steer soon-to-be-former Evergreen employees into new jobs.

State labor officials, who toured the plant on Friday, say they are already moving in that direction. There are plans to hold group sessions to help employees with unemployment and health benefits, as well individual meetings at the plant, said Ken Messina, manager of the state Labor and Workforce Development Department’s Rapid Response Team.

Exactly what will be offered was still being worked out, though, with Evergreen having hired its own outplacement firm, Messina said.

“We have taken a lot of inbound calls from other companies in the area that are looking for the kind of people who have worked at a place like Evergreen,’’ McCarthy said.

State officials said they could not provide statistics on which town would be hardest hit by the plant’s closing, and they referred questions to Evergreen. For its part, the company said it did not have town-by-town employment figures available. The company also declined to provide severance details.

Jobless rates in area communities vary, with Harvard’s 5.7 percent unemployment rate in November below the state average, while Ayer, at 8.3 percent, was slightly higher. The jobless rate in nearby Fitchburg was nearly 12 percent, according to state labor statistics.

Tom Kinch, a member of the Devens Citizens Advisory Committee, which represents residents living on the former Army base, said some plant employees live on the Devens property or in its host communities, though many appear to commute from a greater distance.

“It’s a terrible blow for Devens and I think the whole area,’’ Kinch said.

Harvard Selectman Ronald Ricci said Evergreen for a time became a haven for former Polaroid employees, including some of his friends, though all of his contacts have since moved on.

But Evergreen workers are not the only ones who will be hurt by the company’s decision. Eldridge said he is also concerned about the effect the plant closing will have on local businesses.

“The biggest impact will be on the few restaurants in Devens, and in Shirley, and Harvard, and Ayer,’’ he said.

The plant’s shutdown is also expected to slow efforts to transform the former base into a sprawling office and industrial park and a quasi-independent community.

Kinch and the members of his Devens group have pushed hard to see Vicksburg Square, a collection of historic buildings at the center of the old base, redeveloped into housing.

They believed that as Devens attracted more companies and more jobs, workers at the new companies would then rent apartments or buy homes and condominiums there, helping build more of a village-like, neighborhood feel.

There are now 75 businesses employing more than 3,500 people at Devens, which covers 4,400 acres, according to MassDevelopment. Evergreen accounts for more than 20 percent of the total. With the number of jobs poised to drop dramatically, that idea has been placed on the back burner, Kinch said.

“One of the driving forces to develop a cross-section of homes was industry moving in here,’’ Kinch said. “This is a huge setback for that.’’

Others, include some who were never fans of the housing idea, were even more emphatic that Evergreen’s decision is a game changer.

“There is no need to create housing,’’ said Harvard Selectman Tim Clark.