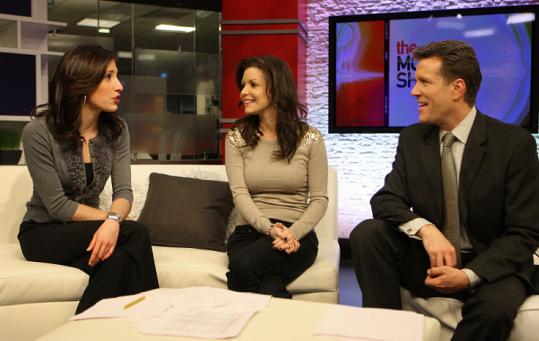 Regional news network NECN is battling for its share of Boston’s morning viewers, redesigning and relaunching its morning news show to resemble popular network programs such as “Good Morning America.’’

At 7 a.m. Monday, “The Morning Show on NECN’’ debuts with two new anchors, 10 news features, updated graphics, and a renovated set that executives believe will help the 24-hour regional news network stand out against local competitors, which mostly air network morning programs at that time.

“It’s really an opportunity to capture the local audience when the broadcast networks go to their national programming,’’ said Bill Bridgen, general manager and executive vice president of NECN since Comcast Corp. took full ownership of the network in June 2009.

Other local TV stations have also recently expanded or retooled their own morning news programs, the second largest revenue generators after the 11 p.m. newscasts. Since April 2010, all of Boston’s TV stations except WHDH-TV (Channel 7) have added a 4:30 a.m. newscast to cater to the changing habits of today’s workers, many of whom have longer commutes and are getting up earlier.

In September, WFXT-TV (Channel 25) expanded its morning show, adding an hour to end the show at 10 a.m. And in November, WHDH officials announced they’re adding a 9 a.m. newscast in September 2011, when syndicated talk show “Live With Regis and Kelly’’ moves to WCVB-TV (Channel 5.) As Comcast was taking ownership of NECN in 2009, the channel started making a number of dramatic changes on and off the air. NECN adopted flashy graphics similar to those seen on Fox News affiliates and was the first local station to launch a 4:30 a.m. newscast.

Analysts have said Comcast is making over the channel to be more youthful. Three longtime anchors — Beth Shelburne, Karen Swensen, and R.D. Sahl — have resigned from the station since the summer. And veteran local broadcaster Chet Curtis will move from anchoring weekday newscasts to hosting NECN’s public affairs shows.

The revamped NECN morning show will compete in a ripe market for early and expanded TV newscasts. As audiences and ad revenues decline, analysts said, station general managers are leaning on their morning programs to retain and add viewers.

“What NECN is doing is simply another example of the increased emphasis of morning news in TV,’’ said Bob Papper, who studies television news trends at Hofstra University. “Nationwide, the audiences for both the early- and late-evening news newscasts have matured and peaked. Morning news is still growing — or at least holding its own.’’

The most recent early newscast numbers reveal a population of early birds looking for traffic, weather, and news. In the competitive November sweeps period ratings for the 4:30 a.m. newscast, for example, WCVB led with 25,000 total viewers, followed by WFXT with 17,000; WBZ-TV (Channel 4) with 13,000; and NECN with 5,000. Network programming helps drive viewers to local shows. In Boston, “Good Morning America’’ delivered 98,000 viewers to WCVB for that sweep period, while the “Today’’ show drew 99,000 viewers to WHDH.

Morning viewers also represent a desirable demographic among advertisers who want to reach women ages 25-54. “If you can generate great demographics in that time period, you use that as a promotional base to promote other day parts,’’ said NECN station manager Bronner, who worked with Bridgen for six months to redesign and reassign staff for the NECN morning show’s relaunch. The revamped show, which will run from 7 a.m. to 9 a.m., will have two new anchors: Steve Aveson and Taryn Winter Brill. Both have reported for ABC’s “Good Morning America.’’ They replace Swensen, who is moving back to New Orleans, and Mike Nikitas, who shifts to NECN’s early evening and prime time newscasts.

Aveson and Brill will work from a set with the homey atmosphere similar to some network morning shows, including couches, a library, and backdrops that feature New England settings. NECN officials did not reveal the cost of the set renovation.

Also new will be weather updates and a news reader offering current headlines. And eight new contributors will host regular featured segments throughout the week, including “Help Me Brian.’’ Bay State contractor Brian Gurry will host, visiting viewer’s homes to help with a domestic project. Another segment — “Jake the Vet’’ — follows Jake Tedaldi on Tuesdays as he makes pet house calls. And there will be a Skype telecast with WTKK-FM (96.9)’s Jim Braude and Margery Eagan, who will discuss the top stories of the morning.

Bridgen said the segments will also serve as tryouts for potential new shows. “There is an opportunity to grow some characters who are local people in the community,’’ he said, “and see who can be long-form shows.’’