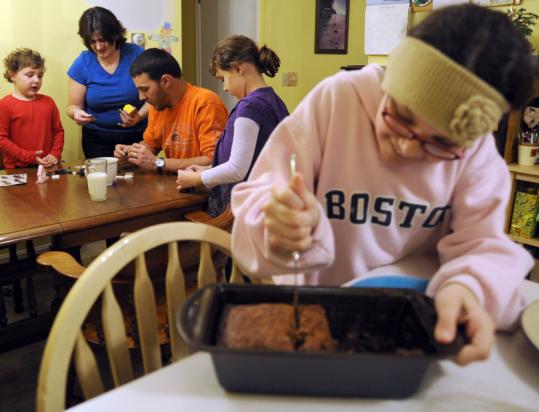 Rachael Law, 10, cut banana bread, while her family played with Legos. The Law family faces foreclosure on their Ashburnham home. (Mark Wilson for The Boston Globe)
By Jenifer B. McKim Globe Staff / January 11, 2011

ASHBURNHAM — Jennifer and Brian Law are caught up in a new wave of suburban and rural home foreclosures, far from the low-income city neighborhoods where the crisis began.

The young couple thought they did everything right in 2005 when, attracted by affordable prices and good schools, they bought a $211,500 ranch in this semi-rural Central Massachusetts town.

But soon, Abbie — the youngest of their three children — became ill, and the Laws faced massive medical bills. When Brian lost his job as an environmental driller in March 2009, they could no longer cover the $1,500 monthly mortgage payments.

Today, the Laws face foreclosure, part of a swelling group of rural and suburban homeowners who are tipping the scales in Massachusetts. There are now more foreclosures outside the state’s urban areas than in them, according to a recent study by the Massachusetts Housing Partnership, a public nonprofit working to expand affordable housing.

The shift of foreclosures from cities to outlying areas indicates that the sluggish economy and a lingering high unemployment rate, not subprime loans and predatory lending, have become the main reasons people lose their homes, the study found.

Ashburnham — a scenic town with five churches, seven lakes, and 6,000 residents — has one of the highest concentrations of troubled homes in the state, according to the housing group. Of nearly 2,000 housing units, 61 were either in foreclosure, bank-owned, or set for auction as of October. The neighboring communities of Winchendon and Athol also have high rates of distressed properties, the study said.

“There are so many people in town that need help,’’ said Jennifer Law, 33, sitting in her tidy kitchen with yellow walls, sunflower trim, and checkered curtains. “There are lots of people living day-to-day.’’

Karen A. Koller, president and chief executive of RCAP Solutions Inc., a nonprofit community development group based in Gardner, said there has been a surge of needy families in the state’s far-flung areas as homeowners have lost jobs or endured steep pay cuts. Many homes also have dropped precipitously in value, making them impossible to sell without approval from a lender willing to take less money.

“We are seeing people leave their properties unattended and as a result many of these properties are falling into disrepair,’’ Koller said.

Unlike in cities — where blight is often concentrated on single streets or in particular neighborhoods because a single investor lost multiple properties — small-town devastation is spread out, making it less obvious to a casual observer. That means public policy makers must find regional solutions instead of focusing on particular streets, said Clark Ziegler, executive director of the Massachusetts Housing Partnership.

Put another way, solving the foreclosure crisis outside of cities is about finding people jobs, not rehabbing a rundown block of apartments.

“In a lot of these more suburban and rural places, it is difficult to know what policy interventions will make a difference, short of seeing employment go up,’’ Ziegler said.

No one is saying foreclosures aren’t still a serious issue in the state’s cities. Brockton still tops the list of communities with the highest rate of distressed properties, according to the housing partnership study. But foreclosures in some urban areas — including Lawrence, Fitchburg, and Springfield — actually dropped over the last year even as the numbers rose in many small towns.

Ashburnham, for instance, ranked third on the Massachusetts Housing Partnership list of municipalities with high rates of problem properties. A year earlier, it was 107th on the list.

The town’s $83,000 median household income is well above the state average of $65,000, according to the most recent census data. But work is hard to come by; the unemployment rate of 9.2 percent in November also exceeded the Massachusetts average, by more than a percentage point.

Douglas Briggs, town administrator, said the town’s modest population might skew the numbers. But he acknowledged the problem is serious. The town plans to hold several public auctions this year to sell about 100 properties that have been taken for unpaid taxes.

It also recently approved a tax amnesty program to get delinquent homeowners back on the tax rolls. The drop in revenue has prompted officials to search for ways to reduce expenditures, including by blending services such as emergency dispatching with nearby towns, and by collaborating with them to buy sand, salt, and other materials in bulk.

The value of municipal real estate in Ashburnham dropped from $696 million to $606 million in the last year, forcing officials to raise the property tax rate by about 6 percent, to $17.15 per thousand dollars of valuation.

Jennifer Law said the couple takes modest comfort in knowing many others in Ashburnham also are hurting. The Laws’ lender, National City Mortgage, agreed to let them make reduced monthly payments for a year. When the 12 months were up, however, it was no longer willing to compromise. The couple hasn’t made a mortgage payment in nine months.

The Laws have survived on unemployment and charity from strangers, friends, family, and church members. Jennifer also worked part-time night shifts as a 911 operator at the local police station, but recently quit because the overnight hours made her feel run down.

The couple attempted to persuade their lender to modify the mortgage, but were denied because Brian’s unemployment and Jennifer’s part-time work were not accepted as income, according to the Laws. PNC Financial Services Group Inc., which bought National City Mortgage in late 2008, declined to comment, citing privacy issues.

Last spring, the Laws decided their only way out was a short sale, a process in which homeowners sell a home for less than they owe on the mortgage, with approval from the lender. So far, they haven’t had any interested buyers, even at a price of $164,000, about $48,000 less than they paid.

Brian, 33, was hired last month as a front-end loader operator, but earns a lot less than in his former job. The Laws plan to once again seek a loan modification, but aren’t hopeful.

Jennifer doesn’t understand why PNC would sell the house to someone else at a loss, but won’t let her family renegotiate its payments to the equivalent price. And even if they somehow negotiate a loan modification, the Laws wonder, will their home’s value ever outgrow their ballooning mortgage balance? It seems unlikely, at least for a while. Late penalties and fees have added to their debt at the same time the property’s value has eroded.

But instead of walking away, as some disheartened owners do, the Laws say they are painting bedrooms and keeping up with maintenance, on the chance their prospects might brighten.

“For today, I have a roof over my head. I have my husband by my side,’’ Jennifer said. “We are not defined by our circumstances, but how we choose to respond to them.’’

10 areas outside cities
hit by foreclosures