Construction will start to pick up 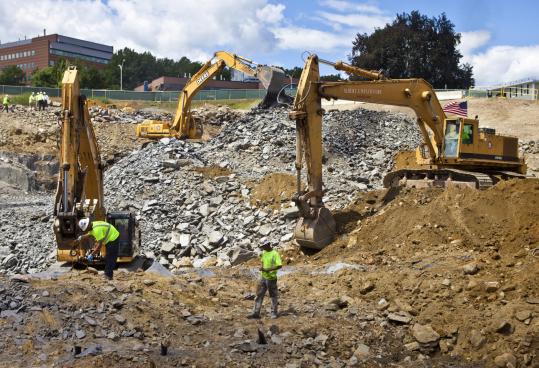 Development activity will pick up in 2011, helping to end a building slump that has persisted for much of the past two years. But don’t expect an explosion of new projects.

The volume of construction will steadily increase throughout the year, with most developers focusing on rental housing, the only real estate product in strong demand. The trend will be particularly pronounced in Boston, where more than a half-dozen 200-unit plus apartment projects are planning to begin construction, including the first homes in the 20-block Seaport Square development on the South Boston waterfront.

Still, large segments of the commercial development market will remain frozen. Almost no one will build office towers because rents remain too low to justify the cost of new construction. Average asking rents for top-flight office space in downtown Boston are hovering around $49 per square foot, well below the $70-to-$80 per square foot price that makes the construction of skyscrapers economically attractive.

The only exceptions will be companies like Liberty Mutual Insurance Co. and the pharmaceutical giant Novartis AG, both of which have enough cash to build new complexes with minimal or no financing. Liberty Mutual is planning to proceed with a $300 million tower in Boston’s Back Bay, and Novartis is plotting a $500 million expansion near the Massachusetts Institute of Technology in Cambridge.

But most companies will hold off building new headquarters, especially with existing office space still available at bargain prices in 2011.

Weakness will also persist in the luxury condominium market. Sales and prices increased in 2010, and will do so again this year. The shaky economy, however, has left vacancies in large Boston projects such as the W Hotel and residences, and 45 Province Street — two projects that serve as cautionary tales for any developer or lender sizing up a condo project.

And, with both condo and office markets sluggish, many of the region’s largest projects — mixed-use developments, including offices, stores, and homes — will remain stuck in neutral.

One barometer of the commercial real estate market will be the fate of the former Filene’s site in Boston’s Downtown Crossing. Work there stalled more than two years ago, and its owners are now trying to sell it.

A deal will probably get done, but it will take several months of planning and design before construction finally moves forward on the blighted site. Moreover, any new proposal will be significantly scaled down from the original, which called for a 39-story tower with offices, condominiums, stores, and a hotel.

The bidders now considering the site are talking up less expensive plans for apartments and stores at street level. Plenty of lenders should be willing to finance such a development, but few will put themselves on the line for anything bigger or bolder.

And that will be the theme throughout the commercial building market: Projects will begin to advance, but slowly, and on a much smaller scale.