Shares in BJ’s Wholesale Club surged 7 percent yesterday on renewed speculation that the Natick discount retailer could soon be sold.

But the New York Post reported yesterday that Leonard Green, which bought 9.5 percent of BJ’s last summer, could launch a hostile bid to buy BJ’s if the company doesn’t go forward with the auction soon. The paper said BJ’s promised Leonard Green it planned to initiate the auction after the holidays.

Under federal securities regulations, public companies are normally required to report significant news. But so far, BJ’s has not publicly disclosed any decision to hire an investment banker to explore a sale or other options.

Cathy Maloney, a BJ’s spokeswoman, declined to comment on yesterday’s speculation, but said the company believes it has followed all the reporting requirements. “If we were required to [report any information], we would,’’ Maloney said.

Morningstar, a Chicago research firm, said in a note to investors that “we don’t find this rumor surprising,’’ given Leonard Green’s stake in BJ’s and its history of investing in retail and consumer companies. But Morningstar cautioned: “There is no assurance that a transaction is imminent.’’

Some financial analysts have predicted that BJ’s, which currently has a market value of about $2.6 billion, could fetch as much as $3 billion at auction. The stock closed at $47.62, up $3.15 in heavy trading yesterday on the New York Stock Exchange. So far this year, shares have climbed 46 percent, compared to 13 percent for the S&P 500, fueled largely by takeover talk.

Retail analysts have said the company could be an attractive buyout target because it has a stable membership income (accounting for much of its profits), strong cash flow, and a solid balance sheet. And like other discounters, BJ’s has fared relatively well, despite the weak economy, as consumers flock to bargains. Profit rose by nearly a third in the third-quarter to just under $23 million, while sales rose 5 percent to $2.6 billion, including a more modest 2.5 percent increase in same-store sales.

But BJ’s, which is run by Wakefield native Laura Sen, remains a distant third to rivals Sam’s Club and Costco Wholesale Corp., which has fueled rumors for years that it could be a takeover candidate. BJ’s, originally founded as an arm of Zayre Corp. in 1984 before becoming a stand-alone firm, has 193 stores in 15 states, mostly in the Northeast and Southeast.

Analysts said that if the company were taken private, it could give the management team an opportunity to reshape the company without facing the usual pressure from Wall Street to meet profit forecasts each quarter. David Strasser, an analyst with Janney Montgomery Scott, told investors that if an equity firm bought the company, BJ’s could temporarily reduce its profits and add stores.

Strasser said a BJ’s deal “makes sense due to the potential for a national store rollout.’’ 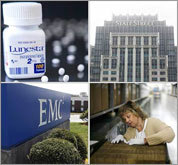