This year, shoppers paying in green to stay out of red

Use of cash, debit cards is nearly double that of 2009 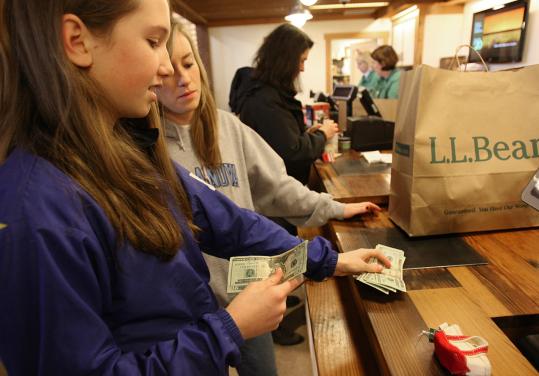 Katrin O’Grady, with Laura Smith, was one of many using cash for a purchase at L.L. Bean in Dedham yesterday. (Suzanne Kreiter/ Globe Staff)
By Jenn Abelson Globe Staff / December 24, 2010

Last-minute shoppers are making a dash with cash to finish their Christmas spending this year.

In an effort to avoid a post-holiday debt hangover, many are taking preventive measures before they head to the malls.

“I hid my credit card in my closet and I refuse to remember where I put it,’’ said Melanie Miranda, who this year committed to a cash-only Christmas for the first time. On Wednesday, with just one gift left to get at South Shore Plaza in Braintree, she was ready to declare seasonal victory.

“I’m not tempted to charge and pay for it later,’’ Miranda said. “I am more easily sticking to a budget.’’

Last weekend, the share of consumers nationwide using credit cards for most purchases fell to an all-time low of 15 percent, compared with 28 percent last year, according to America’s Research Group, a market research firm that has been tracking holiday credit card use for more than 25 years.

“Cash is the king of Christmas,’’ said Britt Beemer, president of America’s Research Group. “It has exploded.’’

People like Miranda, who lives in Dorchester, say they are avoiding plastic to pay off old balances and save for bigger investments, such as a home. Others are trying to stave off impulse buying during tough economic times.

Some consumers no longer have the option to charge: America’s Research Group revealed earlier this year that more than a third of the nation’s credit card users had their spending limits slashed or cut off entirely as banks tightened lending standards.

The growing popularity of paper money has also led to more layaways at major retailers such as Sears and Kmart. This trend reflects how consumers are saving first and buying later, retail analysts said, and is not limited to any particular kind of purchase. People are shelling out currency for everything from outdoorsy gifts at L.L. Bean to cool gadgets at Brookstone.

At Hotel Chocolat, an upscale chocolatier on Newbury Street in Boston, use of cash and debit cards is up 10 to 15 percent this holiday season compared with last year. International travelers looking to take advantage of a favorable exchange rate and younger shoppers trying to stick to a budget are much more likely to use cash, according to Nicki Doggart, Hotel Chocolat’s US chief executive.

Julie Roth took out a wad of dollar bills yesterday to pay for some gifts at Hotel Chocolat. Roth, who used credit cards exclusively for last year’s gift-buying, converted to 50 percent cash this year.

“I’m trying to keep closer tabs on what I’m spending,’’ she said. “And it’s more simple.’’

Although Christopher Messier of Manchester, N.H., said he also has not fully weaned himself off credit cards, customers at a department store where he works “continually tell me things like, ‘I’m only paying with cash this year.’ ’’

Beverly Heinds of Milton found a novel way to cool her spending. She put her credit cards in a freezer instead of in her wallet.

“In light of the economy and with a son in college, we went cash-only this year,’’ said Heinds, who scrambled to complete her last-minute shopping this week at Macy’s in Braintree. “This is a good lesson for my son, that he has to realize you can’t accumulate debt.’’

And those frosty credit cards? Heinds said they won’t be thawing anytime soon.

Will you be shopping on Christmas Eve?