Christopher and Linda Robbins were thrilled to find a buyer for their Watertown condominium this summer, believing they had engineered a graceful way to avoid foreclosure.

But the young couple’s hopes were crushed when their mortgage holder, JPMorgan Chase & Co., rejected the deal on the grounds the condo was worth more than the $240,000 the buyer was willing to pay.

Instead, the parents of two young children watched in anguish Sept. 16 as the bank foreclosed upon their home. Weeks later, JPMorgan put the home back on the market, priced about $7,000 below what the prospective buyer offered. Today, the family is gone and the house is empty.

“We gave it 100 percent of an effort and tried our hardest,’’ said Linda Robbins. “It was the bank not willing to work with us.’’

The Robbinses were seeking what is known as a short sale — when an owner sells a home for less than he or she owes the bank. But as more homeowners attempt to stave off foreclosure by striking such deals, lenders are denying or delaying many of these transactions even when it appears the sales would be in their best interest, according to real estate agents and housing advocates. Eventually, some of the properties are sold at auction for less than the lender would have recouped through a short sale, they say. That not only costs banks, but it further damages homeowners’ credit and depresses overall property values.

“The irrationality in which these applications can be dealt with is absurd,’’ said Thomas J. Percy, managing partner of Percy, Tedeschi & Associates, a Taunton law firm that represents sellers and lenders in short sales. “You can get vastly different answers depending on, among other things, which [bank] negotiator you end up with.’’

Faith Schwartz, executive director of Hope Now, a Washington, D.C., association of lenders, investors, and nonprofit groups aiming to reduce the number of foreclosures, said the short-sale process is hampered by lenders’ concerns about fraud, difficulties in determining property values, and the confusing lineup of players typically involved in a real estate deal.

“It’s one of the more complicated issues in the market,’’ Schwartz said.

JPMorgan Chase would not comment on the Robbinses, but said the company generally prefers short sales over foreclosures, because they cost less and benefit the community. Ultimately, however, the bank’s responsibility is to get a “fair price’’ for a property, and sometimes that means seeking more than the short-sale price — even if it puts the sale in jeopardy, said spokesman Michael Fusco.

But for every three properties at risk of foreclosure, only one is actually seized, Fusco said. The other two are saved through either short sales, loan modifications, or other programs, he said.

Indeed, lenders are growing more cautious about short sales as evidence of fraud in the process escalates along with volume, said Frank McKenna, vice president of fraud strategy for CoreLogic, a California research company. Lenders are losing about $310 million annually in short-sale fraud, with about one in every 53 sales plagued by problems, according to CoreLogic. Those problems include a fraudulent process known as flopping, through which an outside investor or buyer hires a real estate agent to assess a home for less than its true market value and then convinces a lender to sell at that price. The buyer then quickly resells the home at a higher price.

“There is a fear of not getting the right valuation because you have some shady investors,’’ McKenna said.

But many honest homeowners are getting hurt by a banking system that makes short sales difficult, said Anthony Lamacchia, a Waltham broker who tried to help the Robbinses sell their home. Lamacchia and his partner, John McGeough, say the biggest problem with short sales is the way the lenders determine how much a home is worth. Often, they set unrealistic prices that can’t be met, Lamacchia and McGeough said. They said lenders generally rely on cursory reports produced by real estate brokers who are paid about $50 for their work and are not always familiar with the neighborhoods.

“Banks are losing tons of money,’’ Lamacchia said, adding he was frustrated but not surprised by news that the Robbinses’ home was soon on the market at a reduced price. “I told the bank 20 times it is not worth what you think,’’ he said.

To streamline the short-sale process, the Obama administration last year unveiled a plan to help struggling homeowners who can’t work out a loan modification. The program offers $3,000 to homeowners to offset relocation expenses and $1,500 to lenders’ agents to cover administrative costs. But many housing advocates and real estate agents say the program has been largely ineffective.

“We thought this was going to be great. This would give people who didn’t qualify for the modification a way out,’’ said Nadine Cohen, managing attorney for the consumer rights unit of the nonprofit Greater Boston Legal Services, which provides services to low-income clients. “We haven’t seen any,’’ she said, referring to short sales through the federal program.

The Treasury Department, which is administering the program, declined to disclose how many homeowners have enrolled, saying numbers will be released next year. The government is already “considering refinements’’ in the program, a spokesman said.

Meanwhile, stories of botched short sales are becoming more common in Massachusetts. Tony Nakhle, a real estate agent in Stoughton, said he had two deals fall through last year after lenders foreclosed upon homes even after sales were approved. In one case, the lender foreclosed on a house after approving a $136,000 deal, he said. Instead, the home was sold at auction for just $109,000. The buyer then sold the property back to the former owner for $136,000, he said.

“A lot of times, various departments of the bank just don’t talk to each other,’’ he said.

Diane DeCiccio, an agent with Evergreen Realty in Sterling, said a lender recently rejected an offer for a short sale in Sterling for a client who had been trying to sell the home since January — it wanted $8,000 more.

“This house will now go into foreclosure,’’ DeCiccio said. “These buyers are walking. That house is going to sit there. Who is going to maintain it? In the Robbinses’ case, they admit it was a mistake to borrow $292,500 to buy their Watertown home six years ago. Christopher Robbins, 30, who had recently finished a four-year stint in the Army, was a security screener at Logan International Airport in Boston. His wife held a job as a child-care worker. They were approved for a loan that did not require income documentation or a down payment.

The monthly payments on their variable-rate mortgage began to rise immediately, and they soon fell behind on the loan. After failing to convince the bank to rewrite the loan, they opted for a short sale. Following the foreclosure, the Robbinses moved into public housing for veterans, blocks from their former home.

“It is disgusting they couldn’t work with me,’’ Christopher Robbins said. “It puts a lot of stress on families where it could be avoided.’’ 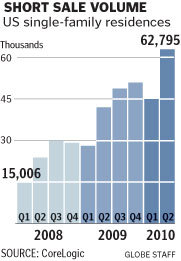