But elsewhere in Mass., employers are done cutting and ready to hire 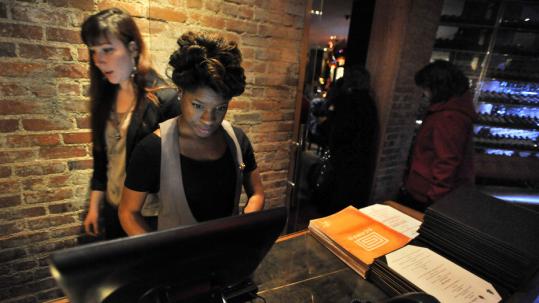 Cori Simeon-Ohiri and co-worker Sara Silberstein (left) are hostesses at Scampo in Boston. Simeon-Ohiri was hired in November after a three-month job search. (Josh Reynolds for The Boston Globe)
By Katie Johnston Chase Globe Staff / December 18, 2010

Dave Thompson hasn’t been in the job market since he found a position at a Lexington software firm in April. But head hunters are more interested in him than ever, deluging the 34-year-old software engineer with news of job openings.

“I get e-mails constantly from recruiters,’’ Thompson said. “It seems to still be picking up.’’

As Thompson’s experience shows, the number of job openings is on the rise in Massachusetts and across the country as the recession gradually loosens its grip and companies begin to rebuild workforces slashed during the downturn. Advertised job openings in Massachusetts have risen for nine consecutive months compared with a year earlier, while postings in Greater Boston last month soared 30 percent from November 2009, according to Monster.com, the online employment listings firm.

The increase in job openings indicates that companies, which have met increasing demand by squeezing more work from existing employees through much of the recovery, are reaching the point at which they need to add workers to keep up with the flow of new business, staffing specialists said. That’s a promising sign for the still sluggish labor market.

“Companies have really relied on pushing productivity improvement much fur ther than they have in previous recessions,’’ said Jerry Rubin, chief executive of Jewish Vocational Service of Boston, a nonprofit organization that provides job training and other employment services. “But there’s limits to that. At some point you begin hurting your own growth possibilities if you’re not putting new people to work.’’

In Greater Boston, the surge in job openings is spread across several of the region’s key employment sectors, including health care, higher education, life sciences, and hospitality, according to staffing specialists. But the real star is information technology.

IT contract openings are at their highest level since August 2000, the peak of the last tech boom, said Dave MacKeen, chief executive of the Wakefield-based IT staffing firm the Eliassen Group. “I think we’re on the verge of a substantial growth cycle,’’ MacKeen said.

MathWorks Inc., a Natick software company, is well into that cycle. With demand for its mathematical computing products growing, and revenues rising at a double digit percentage rate, the company needs more people, said director of recruiting Mike Cianciola. A year ago, MathWorks had 50 jobs open; this month, it has 250.

The small Lexington software company that hired Thompson is also on a hiring spree. Like many businesses, AccuRev took a beating during the recession. Revenues plummeted, and in March of 2009, chief executive Lorne Cooper laid off almost a third of his 73-member staff.

But revenues are on the rise this year, due in large part to rapidly changing technology in smartphones and other devices that use AccuRev’s software. The company is almost back to its pre-recession employment level after hiring 16 employees this year. And it still has six slots to fill.

“A year ago, I felt like I had to hide, there were so many people calling me,’’ Cooper said, referring to the horde of job seekers. “Now all of a sudden I’m trying to pull them out of jobs.’’

Job openings have been increasing around the country, despite a national unemployment rate still hovering near 10 percent. At the end of October, employers advertised 3.4 million jobs, up 44 percent since the low point in July 2009 and the most since August of 2008, according to the US Labor Department.

In Massachusetts, openings in the three months ending in June jumped by more than 20,000, or 45 percent, from the same period a year ago, according to the state’s most recent job vacancy survey. But the 70,000 openings reported in the second quarter were still significantly below the 92,000 at the end of 2007.

More postings doesn’t mean all the jobs are being filled, however. The rate of hiring has not kept up with the rise in opportunities, keeping the unemployment rate stubbornly high.

“Either the businesses are not finding the skilled workers for these positions or they’re just being very cautious about hiring people,’’ said Tim Consedine, an economist with the Bureau of Labor Statistics office in Boston.

Cori Simeon-Ohiri discovered this during her three-month job search this fall. Simeon-Ohiri, 22, who graduated from the University of Massachusetts Amherst in May, found plenty of openings at local hotels and restaurants, but only got a handful of callbacks from the hundreds of catering, waitressing, event planning, and front desk jobs she applied for, some of which required third and even fourth interviews. She finally landed a spot as a hostess at the chic Boston restaurant Scampo late last month.

“It was very competitive,’’ said the Mattapan resident.

Health care, the state’s largest industry, has remained a reliable source of jobs throughout the downturn. But for Best Doctors, a medical consultation company, 2010 has been a record year. Best Doctors has added 68 new nurses, customer service representatives, IT specialists, and sales staff at its Boston headquarters this year, double the number it hired in 2008 and 2009.

The 21-year-old firm, which has medical specialists review cases for clients as part of their employee benefits plan, has been in high demand as companies try to manage the rising costs of health care, said Best Doctors president Evan Falchuk.

Sheri Skeiber, a 34-year-old registered nurse from Pembroke, applied for a case manager position with Best Doctors in June — the first job she applied for during her search — and was offered the position two weeks later. “From my whole experience with looking for a job, finding a job,’’ Skeiber said, “you’d never know there was a recession going on.’’