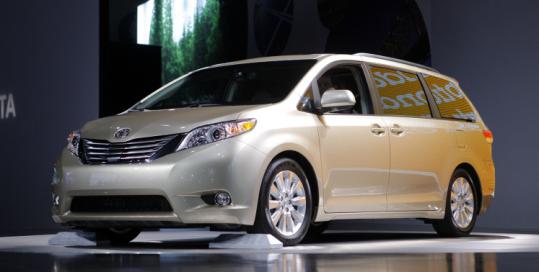 WASHINGTON — Toyota Motor Corp. will recall nearly 100,000 Sienna minivans from the 2011 model year to replace a switch bracket on the brake lamp that could cause the brake lights to stay on.

The Japanese automaker said a driver’s foot could hit the switch bracket and deform it while applying the parking brake pedal. Toyota said it did not know of any accidents or injuries.

Toyota has recalled more than 10 million vehicles in the past year to address faulty gas pedals, floor mats that can trap accelerators, defective braking, and stalling engines. It faces dozens of lawsuits in the United States by relatives of people killed or injured in crashes connected to unintended acceleration.

Sienna owners will be notified of the recall in mid-January 2011 and told how to minimize the potential of hitting the bracket. Replacement parts are expected to be available in February; dealers will replace the bracket assembly at no charge.