WBUR’s new ad campaign is a rarity for public radio 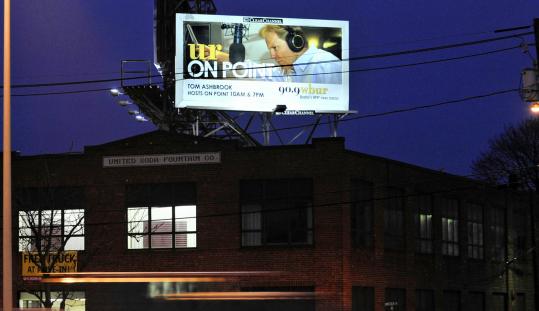 In a series of new TV ads, Bostonians are featured in a montage of scenes at local places from Out of Town News to J.P. Licks. Laced throughout the spots are phrases such as “UR smarter than they think’’ and “UR taking it all in.’’

The “UR’’ refers to listeners of WBUR-FM (90.9), and the ads are part of the Boston National Public Radio affiliate’s new marketing campaign aimed at differentiating itself at a time when it faces fierce competition from WGBH (89.7 and 99.5), another NPR broadcaster. Analysts say the aggressive advertising campaign, which includes TV ads and billboards along Interstate 93 and the Massachusetts Turnpike, is a rarity for public radio.

“Another competitor going directly after the same audience they have makes it all the more important for them to go out there and market themselves,’’ said Scott Fybush, a radio industry analyst. “Public stations are becoming more savvy about their marketing.’’

Corey Lewis, WBUR’s station manager, said the campaign is designed to identify how the station augments and supplements NPR programming, but he acknowledged that it also has to do with the growing competition from WGBH. “That certainly is part of it,’’ said Lewis, who added that the print ads will launch this month.

Indeed, the two public broadcasters have been engaged in a battle — for listeners and donors — since last December when WGBH reinvented 89.7 FM to a full-time, news-talk format and began running syndicated NPR programs that WBUR carries. WGBH also launched two news-talk shows: “The Emily Rooney Show’’ and “The Callie Crossley Show.’’ In response, WBUR expanded its weekly local news magazine show, “Radio Boston,’’ to a daily program last May.

WBUR still leads in Boston public radio. In November, the station ranked 11th in Boston with a 3.9 percent share of listeners, according to Arbitron. But WGBH is expanding its share of the market: The station ranked 20th last month with a 1.1 percent share of listeners — up from 24th in October. Last month, WBUR drew a weekly audience of 455,400 listeners to its daytime programming, while WGBH attracted 258,900 listeners.

But analysts have said that WGBH has an advantage because it can cross-promote its programs on two radio stations — its television arm and website. On its TV and radio stations as well as online, WGBH has been running spots for several months called “Caffeine For Your Ears,’’ to promote 89.7 FM: in the ads, a sugar cube lands in a coffee cup that looks like a radio speaker. And this summer, the station began the “It’s OK to Think and Drive’’ billboard campaign.

“We have a creative department within WGBH so we do these ourselves to place on our own multiple media platforms, and elsewhere,’’ said WGBH spokeswoman Jeanne Hopkins, who declined to comment on WBUR’s new campaign. “It’s a continuing effort.’’

Three years ago, WBUR ran some spots promoting its programming, but the radio station has never done a campaign this big with TV, billboards, and print. For the new campaign, WBUR hired Watertown ad agency Allen & Gerritsen. Executives there decided to play off the catch phrase that WBUR hosts use: “WBUR is supported by you our listeners.’’

“That led to UR,’’ said Peter Alemian, senior vice president of consumer marketing at Allen & Gerritsen, which worked with Powderhouse Productions to film the ads, which air on WBZ-TV (Channel 4), NECN, and WCVB-TV (Channel 5.)

WBUR’s Lewis said the station is spending about $200,000 for the campaign. He said some services were donated. The actors in the spots and the crew that filmed them donated their time, for instance. WBUR also did not pay for the TV spots, but instead worked out cross-promotional deals with the stations.

Donna Halper, a media professor at Lesley University, said that WBUR turned to television and billboards “to get out and tell their story. They are taking a very assertive stand.’’