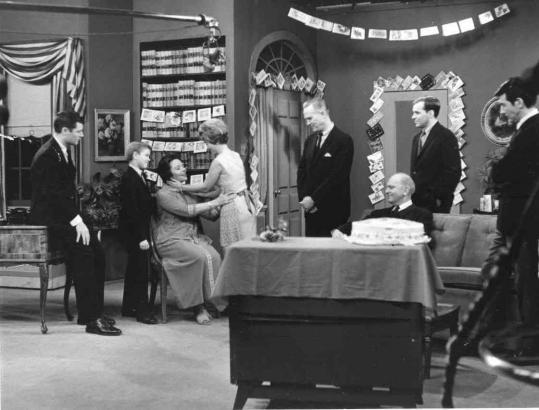 This 1965 photo shows a scene from “As The World Turns,’’ which was television’s leading daytime soap opera. The last one Procter & Gamble produced, it went off the air in September. (Procter &Amp Gamble Co. via Associated Press)
By Dan Sewell Associated Press / December 10, 2010

Procter & Gamble Co., whose sponsorship and production of daytime TV dramas helped coin the term soap operas, has pulled the plug after 77 years. Instead, the maker of Tide detergent and Ivory soap — as well as shaving products from Boston-based Gillette — is following its customers online with a big push on YouTube, Twitter, and Facebook.

“The digital media has pretty much exploded,’’ marketing chief Marc Pritchard said. “It’s become very integrated with how we operate. It’s become part of the way we do marketing.’’

The last P&G-produced soap opera, “As The World Turns,’’ went off the air in September. It was the leading daytime soap for decades, but had lost some two-thirds of its audience at the end.

Over the years, P&G produced 20 soap operas for radio and television. But ratings for daytime dramas have been sinking for years; their target audience, women, increasingly moved into the workplace, switched to talk and reality shows, and spent more time using online media and social networking.

P&G, the world’s biggest advertiser, still buys commercials on daytime dramas. But the dollar amount has shrunk. P&G won’t say how much.

Dori Molitor, whose WomanWise agency specializes in marketing brands to women, said big companies are realizing that using social media is an efficient way to connect with customers.

“Social media has become mass media, and for women especially,’’ she said. “I think for all marketers, these one-way, 30-second [television] spots are very expensive, and are less effective for the way that women make decisions.’’

Marketing experts say the biggest companies were generally slow to adapt to the rapid rise of social networks, but many are quickly making up for lost time.

P&G has begun selling Pampers diapers on Facebook and using social media to turn Old Spice into a pop-culture icon — the “Smell like a Man, Man’’ ads.