To make a strong impression, avoid e-mail; network in person instead 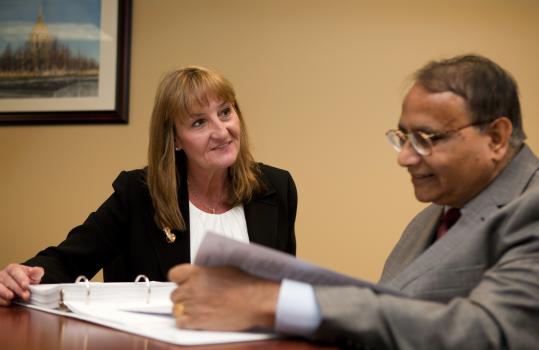 Debra Johnson had a recent networking meeting with Jay Patel of Quality & Productivity Solutions Inc., a consulting and training company in Marlborough. Johnson has been unemployed for about 1 1/2 years. (Ellen Harasimowicz for The Boston Globe)
By Cindy Atoji Keene Globe Correspondent / December 5, 2010

The first job loss was in 2007, when the distributor where she had worked as an event manager for 15 years laid off 50 employees. Two years later, the nonprofit that she was working for eliminated her position as a senior events manager when federal funding dried up.

“At the time, I felt like my left arm was cut off,’’ said Johnson, 48. “And now it was happening again. I felt like I must have done something really bad in a former life.’’

At first, Johnson took her new joblessness in stride, getting additional training and being optimistic about her search for work as a project or events manager. But now, after spending the better part of the past year and half unemployed — she had one temporary, part-time job during that period — the Halifax resident is beginning to get discouraged. So, she applied for a Boston Globe Career Makeover.

When she met with Mark Newall, senior vice president at Keystone Associates, a Boston area career management consulting firm, Johnson said she had been applying for at least 10 jobs a week, networking with “anyone who will speak to me,’’ and using LinkedIn and Facebook to reach out to former employees and co-workers. But she had only landed six interviews.

“Nothing seems to be working in getting my resume and experience in front of hiring managers,’’ she said.

“Networking is a learned technique,’’ said Ne wall, who recommended phone calls and in-person meetings — not e-mails — as the communication tools to uncover the hidden job market. “Reluctant networkers need to step out of their comfort zone and have the important conversations that differentiate you from the competition. You’re selling yourself: the most important thing you’ve ever sold.’’

The trust continuum in networking, he said, begins by targeting a few key companies or organizations, finding contacts in these places, establishing a rapport and connections, and then building a sincere relationship.

“You’re not asking for a job, because that’s seen as opportunistic. Rather, you’re finding out more about the company; the projects they’re working on; any personal links or bonds. The ultimate goal of networking is to build a level of trust so people want to help you and partner with you,’’ said Newall, who suggested that Johnson focus on large financial, insurance, and pharmaceutical companies that regularly host large events.

Johnson also complained that some employers think she’s overqualified. Indeed, Johnson, who jokes that she’s gone from a six-figure salary to “no figures,’’ has listed herself with multiple temporary agencies and has even interviewed for administrative assistant positions.

“They always seem impressed with my experience and resume, and I have even been told, ‘You have too much experience.’ Isn’t that like telling someone they are too smart?’’ she asked.

When faced with comments like “You seem overqualified’’ or “This position is below you,’’ Newall said Johnson should not be afraid to bring up compensation. “Put it on the table if you think it’s a barrier,’’ he said. “We were raised in a generation where it’s assumed to be rude to talk about money, so let them know you’re flexible and that you’re more interested in getting the right role in the right company.’’

Newall also said Johnson should continue to use LinkedIn, a business-oriented social networking site, to find potential job opportunities. Newall pointed out that more and more recruiters are using LinkedIn to post and distribute job listings.

But Newall offered a few LinkedIn tips. He said she should not simply cut and paste a resume, but include keywords that can be picked up by search engines; post a picture of herself; and think about not just the quantity of people she connects to, but also the quality of the connections.

“Connect with people who will help you get found by your target companies, or those who can link you with recruiting or hiring managers,’’ Newall said.

Finally, Newall said Johnson should not undervalue her skills. With limited budgets and belt-tightening, companies are not holding as many conventions and meetings, but with Johnson’s project management experience, Newall assured her that she would find a place where her contributions would be appreciated. “You want people to respect the value and experience you bring,’’ Newall said. “You have the passion and experience and it’s just a matter of time before your project management experience finds a home.’’

DEBRA J. JOHNSON
Goal: Find a job in events or project management that uses her experience in events and corporate strategy and planning.

Problem: “Events management’’ title is pigeonholing her in a narrow field, but her leadership skills are applicable to any project management position.

Recommendations from career adviser Mark Newall
■ Networking is a learned skill and, in addition to e-mail correspondence, requires in-person meetings or phone calls to help sell skills.
■ Forget the artificial sales pitch — successful networkers establish trust and confidence by developing personal relationships that win people over and make them want to assist in a job search.
■ Don’t be afraid to bring up compensation, since information is power while job-hunting and employers might be making assumptions about salary.
■ Keep LinkedIn profile current by including photo and crucial keywords that can help recruiters find your profile.